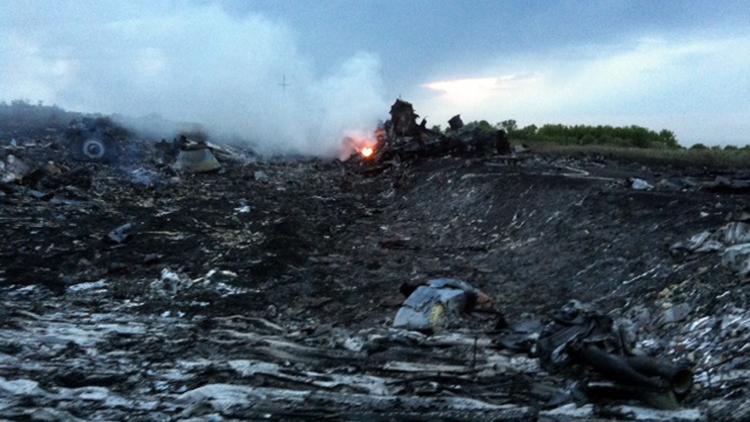 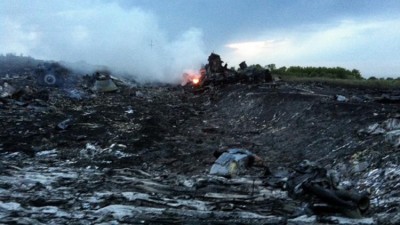 A Malaysia Airlines jet carrying 295 people crashed in eastern Ukraine on Thursday and may have been shot down, Russian and Ukrainian media reported.

An advisor to Ukraine’s Interior Ministry said the Boeing 777-200ER was downed by a ground-to-air missile over territory controlled by pro-Russia separatists near the city of Donetsk.

Malaysia Airlines Flight MH17 was carrying 280 passengers and 15 crew members from Amsterdam to Kuala Lumpur, Malaysia, when it failed to confirm its entry into Russian airspace on schedule at 5:20 p.m., Russia’s Interfax news agency said.

A midair breakup of a long-haul aircraft due to in-flight malfunction is “highly, highly unlikely,” an aviation industry consultant in the Seattle area said, raising suspicions that the plane was shot down.

The office of Ukrainian President Petro Poroshenko said his nation’s armed forces “did not take action against any airborne targets” on Thursday. Ukrainian officials in Kiev noted in their statements on the crash that the pro-Russia rebels have shot down a number of aircraft in recent days over the territory they claim to control. Ukrainian officials earlier Thursday had accused Russian forces of being behind the downing of a Ukrainian Su-25 aircraft near Donetsk the day before.

State-controlled Russia Today television said it had been told by officials of the separatist-proclaimed Peoples Republic of Donetsk that the rebels had nothing to do with the Malaysian jet crash. 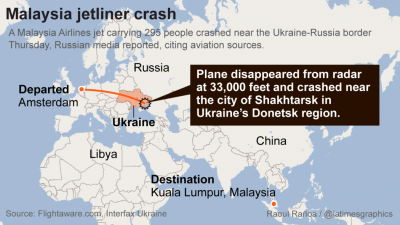 Russia Today also posted photos said to have been taken at the crash scene, including one showing a twisted body lying next to two airline seats and another showing a large piece of the fuselage in an open field. The pictures suggested the wreckage came down in pieces over a wide area.

The jet began losing altitude about 35 miles before entering Russian airspace and “fell down,” minutes later, setting off its emergency beacon, the Itar-Tass news agency said.

The aviation website Flightaware said the last recorded position of MH17 was made at 13:20 UTC [6:20 a.m. PDT] just west of the eastern border of Ukraine.

“This part of the world has limited coverage for us, so gaps of minutes or even an hour are not uncommon,” Flightaware said.

A Russian emergency response team was dispatched to the crash site in the village of Torez, about 25 miles west of the Russian border. The area has been the scene of fierce fighting between pro-Russia militants who have seized and occupied much of the Donetsk and Luhansk regions and Ukrainian government troops trying to recover control of the eastern territory.

The plane “disappeared from radar at 10,000 meters [33,000 feet] and then crashed near the city of Shakhtarsk in Ukraine’s Donetsk region, a source in the Ukrainian law enforcement authorities said,” according to Interfax-Ukraine.

Ukrainian Interior Ministry advisor Anton Gerashchenko said the plane was hit by a rocket fired from a Buk anti-aircraft system, which he maintained had been provided to the rebels by Russia. Ukrainian officials have accused the Kremlin of supporting the separatist rebellion, an accusation Moscow denies.

Russian President Vladimir Putin annexed Ukraine’s Crimea territory to Russia in March after a swift occupation by Russian troops and a hastily organized referendum on independence. The militants in Donetsk and Luhansk regions appear to have been inspired by the Crimea seizure and some have urged Putin to annex the Ukrainian territory they have occupied since March.

“The cynicism of Putin and his terrorists has no limits,” Gerashchenko said in a post on his Facebook page in Russian, suggesting the Malaysian jet downing was also the work of pro-Russia separatists.

Malaysian Prime Minister Mohd Najib Tun Razak said via Twitter that he was “shocked by reports that an MH plane crashed. We are launching an immediate investigation.”

Malaysia Airlines also lost a Boeing 777 on March 7, when Flight MH370 en route to Beijing went missing, setting off a vast search and a mystery that continues to hold the world’s attention.

According to the flight tracking website Flightaware.com, MH17 was last over Ukraine when it disappeared from tracking. The site shows that the 11-hour, 30-minute flight is a daily route between Amsterdam and Kuala Lampur for Malaysia Airlines.

Despite months of violence in the Russia-Ukraine border region, it is a “heavily trafficked” route for airlines, said Andrew Taylor, who works in aviation services for Flightaware.com. For instance, the website shows that there were more than 20 flights slated Thursday between Amsterdam and Kuala Lumpur.

“I’ve not seen any change in flight paths,” Taylor said. “It’s a standard route. We’re just waiting for details to see whether that will change.”

Boeing Co.’s 777 is considered one of the safest aircraft in the skies today. Nearly all of the world’s most important airlines use the planes on long-range routes. It has been a major workhorse for carriers flying from the United States to Europe and Asia.

“In-flight break-ups due to something wrong with the airplane are highly, highly unlikely, certainly suggesting an ‘outside force’ may have been involved,” said Scott Hamilton, an aviation industry consultant and managing director of Leeham Co. in Issaquah, Wash. “But until a shoot-down is confirmed, the only reaction can and should be prayers for the victims.”

In a statement, Boeing said it will provide whatever assistance is requested by authorities.

White House Press Secretary Josh Earnest said President Obama and Putin spoke Thursday morning, at Moscow’s request, to discuss a new sanctions regime the U.S. imposed Wednesday on Russia for its alleged role in the Ukraine violence. It was unclear whether their conversation took place before Obama learned of the Malaysian airliner that crashed in Ukraine.

Earnest said the president had been briefed about the airliner crash and had instructed his staff to keep him updated, and to contact senior Ukrainian officials.