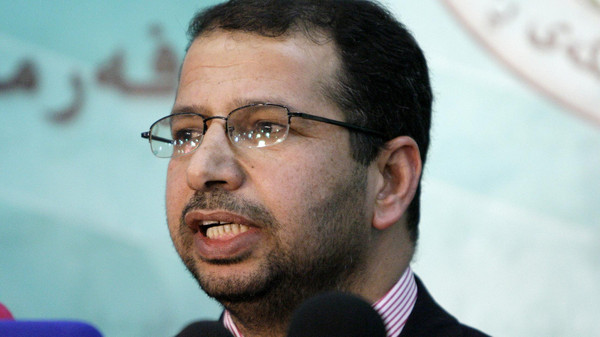 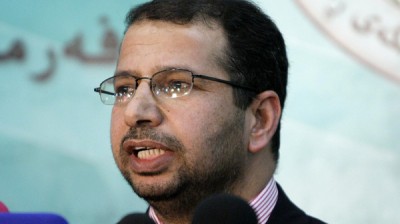 Iraqi politicians named a moderate Sunni Islamist as speaker of parliament on Tuesday, a long-delayed first step towards a power-sharing government urgently needed to save the state from disintegration in the face of a Sunni uprising.

But after quickly picking Salim al-Jabouri as speaker, lawmakers argued bitterly for hours over his Shi’ite deputy, suggesting they are still far from a deal on a new government or a decision on the fate of Prime Minister Nuri al-Maliki.

Iraq’s army and allied Shi’ite militia launched an assault to retake the executed former dictator Saddam Hussein’s home city Tikrit from the al Qaeda offshoot known as the Islamic State and allied militants, who seized it in mid-June during a lightning assault through the north.

The stunning advance by the militants over the past month has put Iraq’s very survival in jeopardy even as its politicians have been deadlocked over forming a new government since an election in April.

Maliki, whose State of Law coalition won the most seats but would need allies to form a government, has ruled since the election as a caretaker, defying demands from Sunnis and Kurds that he step aside for a less-polarising figure.

Washington has made clear that setting up a more inclusive government in Baghdad is a requirement for its military support against the insurgency.

Under Iraq’s governing system in place since the post-Saddam Hussein constitution was adopted in 2005, the prime minister is a member of the Shi’ite majority, the speaker a Sunni and the largely ceremonial president a Kurd. Each of the three is meant to have two deputies, drawn from the other two groups.

Ibrahim al-Jaafari, Maliki’s predecessor as premier and now head of the National Alliance, a Shi’ite umbrella group that includes Maliki’s State of Law bloc and rivals, hinted that a wider deal had been reached: the alliance would vote for Jabouri and expected support from Sunni politicians in return.

“It is the nature of any deal that any commitment should be mutual. It doesn’t make sense that we support them and they don’t support us,” Jaafari said. However, he did not specify whether the Shi’ites now intended to nominate Maliki for a third term as prime minister or choose another candidate.

Parliament chose Haidar al-Abadi, a member of Maliki’s State of Law bloc, as the Shi’ite deputy speaker, but only after three rounds of voting and hours of contentious debate, during which he was unexpectedly challenged for the post by Ahmad Chalabi, a former ally of the United States.

Although Chalabi eventually withdrew, his decision to stand suggested ongoing discord within the Shi’ite alliance over how to allocate top posts, perhaps including the premiership itself.

However, the decision to award the deputy speaker’s post to Maliki’s ally Abadi could increase the likelihood that the prime minister steps aside: an aide to a senior Kurdish politician, speaking on condition of anonymity, noted that in the past the Shi’ite parties had chosen deputy speakers from outside the prime minister’s bloc, to maintain unity among Shi’ite factions.

Iraq’s army and allied Shi’ite militia have managed to halt the advance of Sunni fighters north of Baghdad but have struggled to recapture territory, launching several attempts so far to retake Tikrit.

The Defence Ministry said troops launched their latest assault on the Tigris River city, operation “Sharp Sword”, at dawn on Tuesday, attacking from the south and battling insurgents in the southern districts.

An officer taking part in Tuesday’s assault said uniformed volunteer fighters and militia forces, including the Shi’ite Asa’ib Ahl al-Haq, were fighting alongside the army while following orders from their own militia commanders.

The assault was launched from the village of Saddam’s birth, Awja, some 8 km (5 miles) south of the city which the army retook on the night of July 3.

Tuesday’s initial fighting focused around the Shishin district of south Tikrit, the officer and another soldier said, adding that the army was also heading towards Saddam’s former presidential palace compounds, where Islamic State fighters had held captives and run their Islamic court trials. Soldiers were also fighting to take Tikrit hospital on strategic high ground.

Across the Tigris River to the east, the army landed paratroopers in Albu Ajeel, a village where Iraqiya state television said some insurgents had fled. One army officer in the fighting said they were surprised the resistance they experienced was less fierce than expected.

Five civilians including two young girls and an elderly woman were killed when by stray fire from an army helicopter, a local police officer said.

The Sunni insurgency is led by the Islamic State, which shortened its name from the Islamic State in Iraq and the Levant (ISIL) after last month’s advance into Iraq and declared its leader caliph – ruler of all Muslims.

It now controls a swathe of territory from Aleppo in Syria close to the Mediterranean to the outskirts of Baghdad.

In Iraq last month it initially won the support of other armed Sunni groups, including tribal fighters and Saddam loyalists, but there have been signs that those groups are turning against the al Qaeda offshoot in recent days.

Residents of a town north of Baghdad found 12 corpses with execution-style bullet wounds on Monday following fighting overnight between Islamic State fighters and the Naqshbandi Army, a group led by Saddam loyalists.

Washington hopes a more inclusive government in Baghdad could save Iraq by persuading moderate Sunnis to turn against the insurgency, as many did during the “surge” offensive in 2006-2007 when U.S. troops paid them to switch sides.

Two suicide bombers detonated explosive-packed cars at a restaurant on the road between Samarra and Tikrit, a witness said. A doctor at Samarra hospital said 12 soldiers and volunteer fighters were killed in the blast.

In the town of Mada’in, southeast of Baghdad, two bombs at an army recruitment centre killed nine people, police and medical sources said. In Yousefiya, also south of Baghdad, four soldiers were killed by a roadside bomb on their patrol.

In Falluja, which fell to Islamist militants and other insurgents in January, shelling and air strikes began near dawn and continued through the morning. A doctor at Falluja hospital said five people were killed and 17 wounded, including a child. Helicopters dropped barrels loaded with explosive in the town of Karma, northeast of Falluja, killing four civilians and wounding 22, a source at the town’s hospital said. The hospital was later bombed so severely that it could not receive patients, the source said.

Fighting has yet to reach Baghdad itself, but the capital is frequently attacked by bombers. Two car bombs in quick succession in the Shi’ite Sadr City district killed 12 people and wounded more than 20, police and hospital sources said.