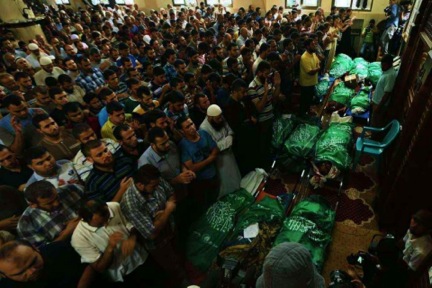 People pray near the bodies of members of the Batsh family. Thousands fled their homes in a Gaza town on Sunday after Israel warned them to leave before attacks on sites used by Hamas and other armed groups to fire rockets into Israel. Mohammed Salem/Reuters
Share:
Israel resumed its air strikes in the Gaza Strip on Wednesday, a day after holding its fire in deference to an Egyptian-proposed ceasefire deal that failed to get Hamas militants to halt rocket attacks.

Attacks in the Gaza Strip killed at least three Palestinians in the early hours of Wednesday and destroyed the house of Mahmoud Zahar – who is believed to be in hiding elsewhere – in the first apparent targeting of a top Hamas political leader.

The week-old conflict seemed to be at a turning point on Tuesday, with Hamas defying Arab and Western calls to cease fire and Israel threatening to step up an offensive that could include an invasion of the densely populated enclave of 1.8 million.

Under a blueprint announced by Egypt – Gaza’s neighbour and whose military-backed government has been at odds with Islamist Hamas – a mutual “de-escalation” was to have begun at 9 a.m. (0600 GMT), with hostilities ceasing within 12 hours.

Hamas’ armed wing, the Izz el-Deen al-Qassam Brigades, rejected the ceasefire deal, a proposal that addressed in only general terms some of its key demands, and said its battle with Israel would “increase in ferocity and intensity”.

But Moussa Abu Marzouk, a Hamas political official who was in Cairo, said the movement, which is seeking a deal that would ease the Egyptian and Israeli border restrictions throttling Gaza’s economy, had made no final decision on Cairo’s proposal.

The Israeli military said that since the ceasefire deal was to have gone into effect, Hamas had fired 123 rockets at Israel, one killing a civilian – the first Israeli fatality in the fighting. 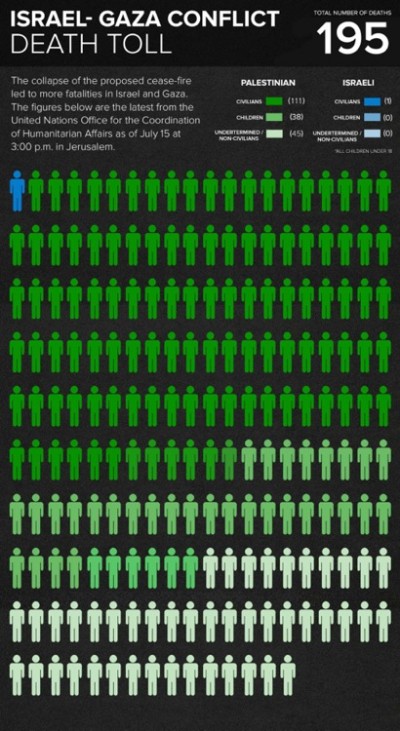 Gaza medical officials say 194 Palestinians, including at least 150 civilians, among them 31 children, have been killed.

Israel’s Iron Dome anti-missile system intercepted 20 of the Hamas projectiles, including two over the Tel Aviv area, and the rest caused no damage or casualties.

Hamas and Islamic Jihad claimed responsibility for the attack against Israel’s commercial capital, which has been targeted frequently since the war began, as well as for the rocket that killed the Israeli man along the border.

Israel, citing the persistent salvoes, resumed attacks in Gaza six hours after implementation of the truce was to have begun. The military said it targeted at least 20 of Hamas’ hidden rocket launchers, tunnels and weapons storage facilities.

Prime Minister Benjamin Netanyahu said in broadcast remarks late on Tuesday that Israel had no choice but to “expand and intensify” its campaign on Hamas, though he did not specifically mention the possibility of a ground incursion.

The Iron Dome has shot down most projectiles liable to hit Israeli towns and cities, but the rocket salvoes have made a rush to shelters a daily routine for hundreds of thousands of people across the country.

The surge in hostilities over the past week was prompted by the murder last month of three Jewish seminary students in the Israeli-occupied West Bank and the revenge killing on July 2 of a Palestinian youth in Jerusalem.

Israel said on Monday three Jews in police custody had confessed to killing the Palestinian.

Sirens sounded on Tuesday in areas up to 130 km (80 miles) north of the Gaza Strip.

Speaking in Vienna, US Secretary of State John Kerry supported Israel: “I cannot condemn strongly enough the actions of Hamas in so brazenly firing rockets, in multiple numbers, in the face of a goodwill effort (to secure) a ceasefire.”

Netanyahu, whose security cabinet voted 6-2 earlier on Tuesday to accept the truce, had cautioned that Israel would respond strongly if rockets kept flying.

He said he expected the “full support from the responsible members of the international community” for any intensification of Israeli attacks in response to Hamas spurning a truce.

Earlier, Sami Abu Zuhri, a Hamas spokesman in Gaza, said that demands the movement has made must be met before it lays down its weapons.

Palestinian President Mahmoud Abbas, who reached an agreement with Hamas in April that led to the formation of a unity government last month, called for acceptance of the proposal, the official Palestinian news agency WAFA said. Abbas was expected to arrive in Cairo on Wednesday for talks with President Abdel Fattah al-Sisi, the Palestinian leader’s spokesman said. The Arab League, at a meeting on Monday, also welcomed the ceasefire plan.

Israel had mobilised tens of thousands of troops for a threatened Gaza invasion if the rocket volleys persisted.

“We still have the possibility of going in, under cabinet authority, and putting an end to (the rockets),” Amos Gilad, a senior Israeli defence official, said.

Under the proposal announced by Egypt’s Foreign Ministry, high-level delegations from Israel and the Palestinian factions would hold separate talks in Cairo within 48 hours to consolidate the ceasefire with “confidence-building measures”.

Hamas leaders have said any deal must include an end to Israel’s blockade of Gaza and a recommitment to a truce reached in an eight-day war there in 2012.

Hamas also wants Egypt to ease curbs at its Rafah crossing with Gaza, imposed after the military ousted President Mohamed Mursi, an Islamist, a year ago.

The Egyptian proposal made no mention of Rafah or when restrictions might be eased.

Hamas has faced a cash crisis and Gaza’s economic hardship has deepened as a result of Egypt’s destruction of cross-border smuggling tunnels. Egyptian authorities also accuse Hamas of assisting anti-government Islamist militants in Egypt’s Sinai peninsula, an accusation that the Palestinian group denies.

Hamas has said it also wants the release of hundreds of its activists arrested in the West Bank while Israel searched for the three missing teenagers. The proposed truce also made no mention of the detainees.