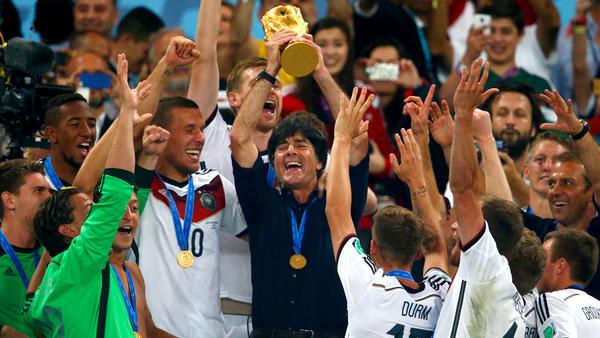 When the final whistle sounded, Mario Goetze disappeared under a dog pile of German teammates in the middle of the field.

Argentina’s Lionel Messi, meanwhile, ran his left hand over his face and hair, sidestepped the celebration and joined his teammates, many of whom were in tears, at the other end of the field.

The gap between winners and losers has rarely been both as wide and as narrow as it was Sunday after the World Cup final, with Goetze’s goal 23 minutes into extra time giving Germany a title it has been chasing for 24 years, while denying Messi the one prize he hasn’t won.

The play that made the difference happened in the blink of the eye, with Andre Schuerrle making a long run up the left wing and whipping a cross into the box where Goetze, a second-half substitute, chested the ball down, then volleyed it into the netting at the far side.

The whole thing took less than 10 seconds. Yet in that span heroes were made and legacies were destroyed.

“I said to Mario, ‘OK, show to the world that you are better than Messi and you can decide the World Cup,’” German Coach Joachim Loew said of his challenge to Goetze.

And now the 22-year-old, who didn’t even start his team’s last three games, will forever be celebrated for the goal that ended Germany’s longest World Cup title drought since World War II and made it the first European country to win a world championship in the Americas.

“It’s an unbelievable feeling,” Goetze said. “When you score that goal, you don’t really know what is happening. At the end of the match, it was indescribable, having a party with the team. A dream became a reality. It is absolutely sensational.”

Also sensational was Bastian Schweinsteiger, the imposing square-jawed midfielder who will forever be hailed as a warrior. On Sunday he climbed off the turf again and again, the final time after a collision with Argentina’s Sergio Aguero left blood streaming from a cut under his right eye.

Schweinsteiger lay on the ground in front of the Argentina bench, kicking his legs in pain as three trainers worked to repair the wound, He then dashed back on the field to play through both overtime periods.

Then there was Schuerrle, Germany’s key bench player who rescued the team time and again during this tournament. And goalkeeper Manuel Neuer, who pitched shutouts in four of his seven World Cups starts.

“The steep joy and happiness, I think it will be with us forever,” Loew said.

On the other side there was sadness. Messi, a four-time world player of the year, got his country back to the final for the first time in more than two decades. But alone, he couldn’t get Argentina over that final hump.

He carried his team through group play, scoring four of its six goals. He then willed it through the knockout phase, where three of Argentina’s games went to overtime.

Then came the final.

The best players are supposed to be at their best in the biggest games — Michael Jordan in the NBA Finals, Orel Hershiser in the World Series, Joe Montana in the Super Bowl — but Messi on Sunday looked tired. Crushed under the pressure, he paused once and appeared to vomit on the field. Yet he still managed a game-high four shots despite the fact half of Germany appeared to have ahold of his jersey.

But while Germany was a team, Messi was an individual — and in the end he was simply outnumbered.

Angel Di Maria, the motor that drives Argentina’s attack, went down in the quarterfinals with a thigh injury and didn’t play again. The four forwards Messi teamed with — Aguero, Gonzalo Higuain, Ezequiel Lavezzi and Rodrigo Palacio — combined for 83 goals with their club teams last season yet scored just one in seven games here.

Higuain got close twice in the first half, but in the 21st minute he mis-hit a shot at the end of a breakaway and sent it wide, then eight minutes later he had a goal disallowed by an offside call.

Early in the first overtime Palacio flipped a soft shot over an out-rushing Neuer but that, too, bounced harmlessly wide of the net.

Then came Goetze’s score. And though it was the only goal Argentine goalkeeper Sergio Romero allowed in four games and 493 minutes, it proved to be one too many.

Afterward, Argentina Coach Alejandro Sabella applauded his players. They had reached the final unbeaten, winning once in overtime and another time on penalty kicks. They had played 450 minutes of World Cup soccer in 12 days and in Sabella’s mind they hadn’t lost, they had been beaten.

The gaps between winners and losers, after all, is a narrow one.

“These were warriors,” said Sabella, who probably was coaching his last game with the national team. “Beyond the result and the sadness, there is something to be said about the performance. They left their skin on the pitch.”