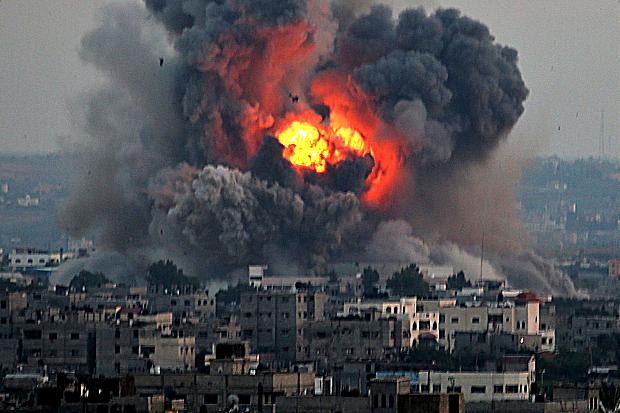 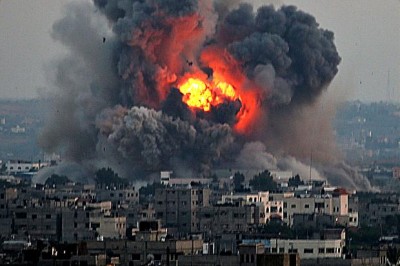 Israel has vowed no easing of its aerial bombardment of Gaza, which has killed at least 120 Palestinians, as a defiant Hamas rained more rockets on the Jewish state. A charity for disabled people was reported to be among the latest targets struck as the Palestinians and their international supporters began drafting a UN resolution calling for “an immediate, durable and fully respected ceasefire”.

Diplomatic efforts to end the hostilities have gathered pace, with Barack Obama phoning Israel’s prime minister, Binyamin Netanyahu, and Washington offering to use its relationships in the Middle East to help end the hostilities.

Early on Saturday 16 Palestinians were reported to have died in a wave of Israeli air strikes as Operation Protective Edge entered its fifth day.

Among them were two people killed in a strike that hit a charitable association for the disabled in Beit Lahiya in northern Gaza, and another three people died in an attack in western Gaza City. Another strike killed three in the eastern Tufah neighbourhood of Gaza City, Gaza health ministry spokesman Ashraf al-Qudra said.

Speaking at a news conference Friday in Tel Aviv, Netanyahu said he would not end the military campaign until he achieved his goal of stopping the Hamas fire. “No international pressure will prevent us from striking, with all force, against the terrorist organisation which calls for our destruction,” he said. “No terrorist target in Gaza is immune.”

Despite international concern truce efforts have been unsuccessful, according to Cairo, which has been key in mediating previous Hamas-Israel ceasefires. “Egypt has communicated with all sides to halt violence against civilians and called on them to continue with the truce agreement signed in November 2012,” the Egyptian foreign ministry said.

“Unfortunately, these efforts … have met with stubbornness.”

After weeks of rocket fire into its southern flank Israel appeared bent on dealing a fatal blow to the Gaza-based Islamist Hamas. Ismail Haniya, Gaza’s former premier and the most senior Hamas official in the coastal enclave, also ruled out any end to hostilities.

“[Israel] is the one that started this aggression and it must stop, because we are [simply] defending ourselves,” he said.

Israel says preparations are under way for a possible ground attack, with tanks and artillery massed along the border and 33,000 reservists mobilised out of 40,000 approved by the cabinet.

The Israeli foreign minister, Avigdor Lieberman, said on Friday that he expected a political decision on a possible ground operation within 48 hours. “At the moment we are dealing with the first phase … air attacks,” he told Channel One television.

“I imagine we shall decide tomorrow [Saturday] or the day after on the next stage.”

Hamas’s armed wing, the Ezzedine al-Qassam Brigades, kept up a steady stream of rocket fire on Israel throughout Friday.

Five rockets were shot down over Tel Aviv by the Iron Dome anti-missile system, the army said.

The Brigades said their militants had targeted Israel’s main international airport near the city.

The Israeli military said in a statement that it had struck “several terrorists conspiring to launch rockets at Israel” but did not elaborate.

So far no one in Israel has been killed. Two have been seriously wounded, including a man at a petrol station hit by a rocket.

In northern Israel at least one rocket fired from Lebanon struck an open area near the town of Metula, prompting troops to hit back with artillery fire, the army said.

The military believed a Palestinian group had fired in solidarity with Hamas, public radio reported.

The escalating violence brought more offers of truce negotiations from the White House on Friday.

“There are a number of relationships the United States has that we are willing to leverage in the region to try to bring about an end to the rocket fire that’s originating in Gaza and, as we saw this morning, in Lebanon,” said White House spokesman Josh Earnest.

He referred to taking steps as the US and Egypt did in November 2012 to broker a truce between Israel and Hamas.

Kuwait called for an urgent Arab foreign ministers meeting to discuss “the deteriorating situation” in the Gaza Strip, its Arab League representative said, which could take place on Monday.

Israeli strikes on residential buildings in Gaza brought a rebuke from the UN’s human rights office over the number of civilian casualties from strikes on homes.

“Even when a home is identified as being used for military purposes, any attack must be proportionate … and precautions must be taken to protect civilians,” said spokeswoman Ravina Shamdasani.

A group of 34 charities and NGOs also called for an end to the fighting.

“Military actions by all parties must stop,” said a statement signed by groups including ActionAid, CARE, Oxfam and Save the Children.

Amnesty International called for the United Nations “to immediately impose a comprehensive arms embargo on Israel, Hamas and Palestinian armed groups” and launch an enquiry into “violations committed on all sides”.

Since the start of Israel’s operation on Tuesday about 525 rockets had struck the Jewish state and Iron Dome had shot down around 138, an army spokeswoman told Agence France-Presse on Saturday.