Hezbollah profits from hashish as Syria goes to pot 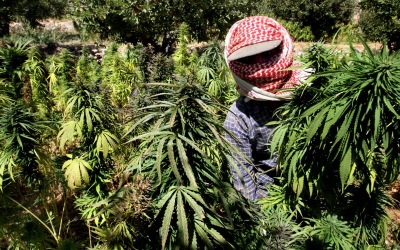 BEIRUT, Lebanon — As you drive along the provincial roads of the Bekaa Valley, a region that stretches for about 75 miles from Mount Lebanon to the mountains next to the Syrian border, it’s not uncommon to come across marijuana plantations extending almost as far as the eye can see. And as the Syrian conflict deepens, Lebanese hashish and marijuana growers are increasing production along with profits.

Local politicians know about it, police know about it, the Lebanese army is aware of it and so are authorities in Beirut. But nobody wants to, or can, fix the problem. The majority of these plantations are controlled by Hezbollah.

“The police and the army can’t stop me even if they wanted to,” says one of the farmers working on a plantation not too far from Baalbek, Hezbollah’s de facto capital.

Before the Syrian uprising turned into an outright civil war, the Lebanese army routinely entered areas of the Bekaa Valley to destroy fields and crops to keep drug trafficking at bay.

Extensive security operations of this kind have been made possible thanks to aid provided by the United States government to the Lebanese Armed Forces (LAF). State Department numbers show the United States has provided $1 billion since 2005, and since 2007 over $140 million have gone to the Internal Security Forces, who are responsible for keeping drug trafficking at bay.

But over the last two and a half years things have changed. Today, the limited resources of the LAF are deployed to patrol the porous borders with Syria and keep a security situation on the verge of chaos under some kind of control. “It is no secret to say that these networks [of hashish producers] are very well armed in order to protect their marijuana fields,” says Ohannes Geukjan, professor of political science at the American University of Beirut. “There are some areas in the Bekaa Valley and Hermel where the government and the army have been unable to penetrate.”

The U.S. embassy in Beirut declined to comment when queried about the extent and effectiveness of its assistance in the war against drugs.

In the current environment producers are able to grow their crops unchecked and are able to traffic their drugs undisturbed from ports in the mostly Hezbollah-controlled parts of Lebanon and overland all the way through lawless Syria, a country where Hezbollah is fighting on the side of President Bashar Assad.

As a result, Lebanese marijuana and hashish is today able to reach the Jordanian, Iraqi and wealthy Dubai market with ease. But most importantly it serves the growing demand coming directly from Syrian consumers.

“Since the war started everyone fighting in Syria began smoking hashish, taking cocaine or other types of drugs,” says “Imad,” 24, a Syrian originally from Damascus who is now living in Beirut and working as a bartender. “Some people use them to fight, others to forget about the situation. And don’t get me wrong: there are men from Bashar’s army as well as from the Free Syrian Army. It’s a terrible situation.”

Last year production was so abundant that consumers enjoyed a sharp drop in prices: a “bundle” (about 6 ounces) of an average-quality Red Lebanese (the most common type of hashish produced in Lebanon) went down from $50 to $30 in just over a year.

Marijuana plantations and hashish production are, of course, nothing new in Lebanon. Such illegal farming has been common since the 1970s, when the 15-year-long civil war created the perfect environment for a production boom. The country was divided, factions took over control of different areas and hashish production represented the easiest ways to make fast cash, buy weapons and provide an income for the fighters.

What’s different is that the fractured societies and lawless regions that once seemed particular to Lebanon now afflict the entire region.

“This is our land and the government has no right to tell us what to do,” says Hassan, 28, one of the workers at another plantation not far from Balbeek. “And what have they done for us over the years? Nothing! So what do they want?”

Former Lebanese Minister of Agriculture Hajj Hassan, a key member of Hezbollah says bluntly that “those who think that an alternative to hashish exists are wishful thinkers.”

In what is not too far from a feudal system, people often feel more committed to the local family than to a state that has long neglected them. A legacy so strong that often farmers open fire on the army when it enters the area to try to destroy fields.

The most famous of the clans is Zaiter. It is headed by Noah Zaiter, considered one of the more powerful men in the country. His influence is so great that Lebanese claim he once publicly stated “make Marijuana and hashish legal for six months and I’ll pay down all government debt,” which is around $36 billion.

The second reason the government has adopted such a laissez-faire attitude toward drug producers is an economic one. Syria and Lebanon are two deeply intertwined countries. Every move in Damascus has wide repercussions in Beirut or, as a local say, “a breeze in Syria becomes a storm in Lebanon.”

As the conflict across the porous border continues with no end in sight, tourism in Lebanon (a sector that accounts for roughly 25 percent of the local economy) has collapsed, transactions in the high end of the real estate market (roughly another fifth of GDP) have slowed significantly and food exports, a sector accounting for about 17 percent of GDP, have plummeted because it’s impossible to travel through Syria with legitimate crops for other Arab markets.

So as Syria fights, the Lebanese economy crumbles and hashish becomes an even more important form of income for an even greater number of people. The cost of starting such business is also incredibly attractive. To irrigate a dunum (roughly 0.25 acres) of potatoes the cost stands at about $1,000, while for a marijuana field the cost of irrigation is around $400.

Growing dope make sense at a time when almost nothing else does.