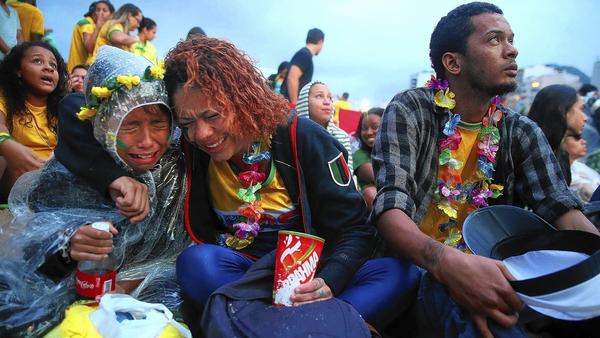 Generations after that defeat in 1950, the national team was under enormous pressure not to repeat the bitter experience. It didn’t.

This drubbing was worse. Much, much worse.

The final score was more than just a humiliation. Brazil was playing at home, where it hadn’t lost a game that counted since 1975. But with millions around the globe watching the pressure-packed World Cup semifinals, it suffered the most lopsided defeat in the history of the national team.

By the time substitute Andre Schuerrle knocked in Germany’s last goal, some Brazil fans had long left the stadium. Or started cheering for the other team. Or booing their own players. Others cried or simply sat in stunned silence.

It is often noted here that Brazil never had a major war or revolution to pull all of its people together and forge a national identity. Some argue that soccer plays that role, gathering the entire continent-sized country into one giant yellow jersey and projecting an international image. No matter what else went wrong — and things frequently did — the sport was where Brazil excelled.

So even though they faced a traditional powerhouse Tuesday without their star player, Neymar, who was out with a broken vertebra, or their captain, Thiago Silva, who was suspended for a game, Brazilians had hope.

It vanished in a barrage of Germany goals — five in the first 30 minutes, and four of those within just six minutes — that left Brazilians stunned and angry. The reaction could spill over into the country’s politics, giving new energy to those who questioned the decision to host the World Cup in the first place, and the billions of dollars spent to make it happen.

“Look, I don’t have the slightest idea how to describe how I feel right now. It’s very confusing,” said Jesse Gomes, a 47-year-old construction worker cradling a beer in downtown Sao Paulo as some performers on a stage nearby tried halfheartedly to coax the crowd back into a party mood. “We’ve been knocked down. We’ve been knocked far down.”

Nearby, a group of fans from Argentina, a neighbor and huge soccer rival that will face the Netherlands in the other semifinal, tried to provoke Brazilians by shouting their slogans loudly at the crowds. No one cared enough to even respond.

The magazine Veja sent out a picture via Twitter of fans burning a Brazilian flag. Other news organizations showed images of a couple of buses on fire and a shop that had been looted, but it was unclear whether they were tied to the World Cup loss.

Some teenagers on the streets of Sao Paulo continued to laugh and drink and flirt after the game. But much of the country was in the throes of despair.

In 1950, the first time Brazil hosted the World Cup, it needed only a tie against tiny Uruguay to win the title. Many Brazilians considered their team a shoo-in. The stunning upset at Rio de Janeiro’s Maracana stadium became known simply as “the Maracanazo,” and literary icon Nelson Rodrigues argued that it inspired the complexo de vira-lata, a Brazilian inferiority complex still cited today.

Regardless of who clinches the World Cup in Sunday’s final, Brazil still will have the most wins. Over the years it has won five times. If Germany wins, it would be its fourth. And fans, who can be more fickle in their attitudes toward the national squad than they are toward their local teams, didn’t entirely embrace this young team, especially after Neymar went down.

But that provided neither consolation nor explanation.

“No one will ever forget the day Germany scored seven goals against us,” said television announcer Galvao Bueno.

“This will be unacceptable to the Brazilian people,” said Lucas Rodrigues, 19, who was pouring beers for fans who came laughing, crying or numb into the downtown Sao Paulo bar where he works. “The minimum that we were owed was to be champions, to make up for all of our resources spent to put on this Cup. The protests were suspended for the tournament, but could easily come back afterwards.”

Protests started in June 2013 over a bus fare hike but gradually evolved and adopted the theme of the World Cup’s high costs. Critics complained that officials should have paid more attention to fixing the country’s chronically poor public healthcare, education and transportation.

Then there were the other costs. The semifinal took place in Belo Horizonte, capital of Minas Gerais state. Last week, an overpass that was part of an unfinished World Cup construction project collapsed there, killing two people. Other construction accidents at World Cup venues had already claimed eight lives.

Before the tournament started June 12, more than 60% of those polled said it would be bad for the country. That changed as infrastructure hiccups seemed to be relatively limited and Brazilians garnered praise for their hospitality and for the entertaining games.

But the mood turned again Tuesday, and by the time Germany scored its sixth and seven goals, it was to the sarcastic cheers of at least some Brazil fans at the stadium and a viewing party in Sao Paulo. Fans insulted Fred, a Brazilian player considered to have underperformed in the tournament, and cheered when he was taken off.

By the end of the game, the shock and sadness that silenced the crowd in the first half had bizarrely transformed into manic gallows humor and jeering, as if it were impossible to take seriously what had just happened.

Brazil has one game left, for third place against the loser of the Argentina-Netherlands match.

“Maybe, just maybe,” said Agripino Ferreira de Oliveria, a stock assistant in downtown Sao Paulo, “we can fight back and save face in the third-place game Saturday.”