U.S. diplomat: Bahrain expulsion ‘not about me’ 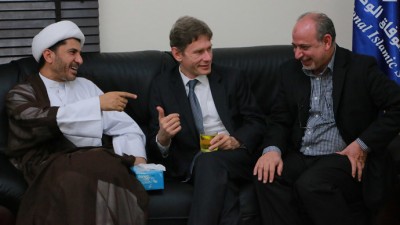 U.S. Assistant Secretary of State for Democracy, Human Rights and Labor Tom Malinowski made the comments on his Twitter feed a day after Bahrain’s Foreign Ministry said he is not welcome in the strategic island nation, which has long hosted the U.S. Navy’s 5th Fleet.

Bahrain alleged he intervened in the country’s domestic affairs by holding meetings with some groups at the expense of others. The order to leave came after he held talks with Bahrain’s main Shiite opposition group, Al Wefaq.

He arrived in the country Sunday and had been scheduled to stay for three days.
In his Twitter comments, Malinowski said Bahrain’s decision to expel him is “not about me but about undermining dialogue. Those committed to reconciliation should not be deterred.”

Tiny Bahrain continues to face low-level unrest more than three years after a Shiite-dominated opposition movement inspired by the Arab Spring protests took to the streets to demand greater political rights from the Sunni monarchy. Bahrain moved to crush the uprising with the help of security forces from Saudi Arabia and other neighboring Gulf Arab states.

Repeated rounds of talks between the government and members of the opposition have failed to significantly defuse the tensions. Some Shiite factions oppose the dialogue efforts altogether because they don’t think they will lead to real change.
Activists frequently clash with security forces in the streets, occasionally deploying explosives that have caused a number of casualties, including a police officer killed in a bomb blast last week.

Bahraini officials could not be reached to comment Tuesday on Malinowski’s comments.

Malinowski visited Bahrain to reaffirm and strengthen bilateral ties and support King Hamad bin Isa Al Khalifa’s reform and reconciliation efforts, U.S. State Department spokeswoman Jen Psaki said Monday. She said the said the U.S. is “deeply concerned” by Bahrain’s demand that he leave and said Bahrain’s government “is well aware that U.S. government officials routinely meet with all officially recognized political societies.”
Bahraini authorities insisted that a Foreign Ministry official attend all of its envoy’s private meetings, including those at the U.S. Embassy, she added.

The U.S. Embassy in the capital, Manama, separately on Tuesday hit back at suggestions that Malinowski only planned to focus on meetings with the opposition.

On its official Facebook page, the mission said the envoy was scheduled to meet with “a broad swath of Bahraini society,” including the crown prince and other senior government officials. He held talks Monday with the Minister of Interior, police chief and the National Institution for Human Rights in addition to Al Wefaq.
An American official said Malinowski had internal meetings at the U.S. embassy Tuesday and was expected to leave the kingdom later tonight.