Women train with AK-47 to defend Baghdad against ISIS 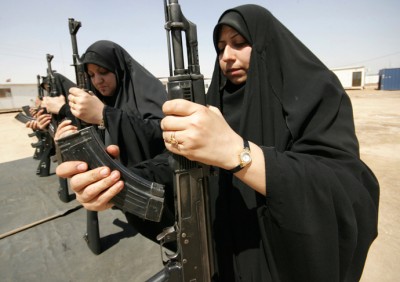 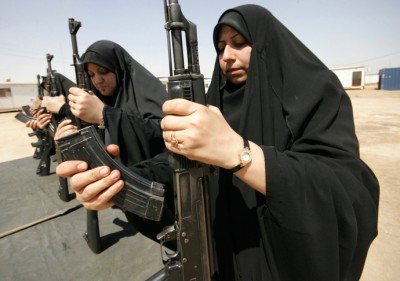 With one hand, Zahra Hassan clutches a purse that matches her red blouse and skirt trimmed in blue.

Peering through her blue veiled hijab, the traditional Muslim head cover, the petite 25-year-old watches as the man in a military uniform with no insignia shows her how to switch off the rifle’s safety, take aim and fire.

Then it’s her turn. In red ballerina flats, she positions herself, levels the AK-47 toward a thick patch of date palms and pulls the trigger. Bang! The feel of the weapon discharging a round startles her a bit.

“Then you turn the safety on and lower the weapon,” the man tells her. She follows his instruction.

This is day one of a five-day course being offered by the Badr Brigade, a powerful Shiite militia with an estimated 10,000 members, to the wives, mothers, sisters and daughters of the group.

Hassan is not training to go to the front line to fight the Islamic State in Iraq and Syria and its allied Sunni militants, but rather to defend her home if the terror group makes its way into Baghdad and ignites sectarian fighting in the streets.

With most of the men in her family leaving home to volunteer to fight ISIS and its allies, Hassan says she has no choice now but to learn how to fight.

More than 450 women have been through the training since the group started it this year, a step that was taken after ISIS began its battle for the flashpoint city of Falluja in Anbar province — a battle that was a bellwether of things to come in Iraq.

And thousands more are waiting, says Maj. Kareem Abdullah of the Badr Brigade, sitting in his office in a fortified compound in Yarmouk, a mixed Shiite-Sunni neighborhood in Baghdad.

The number of women volunteers swelled in June after ISIS seized Iraq’s second-largest city, Mosul, and then began a march on the Iraqi capital, vowing to hit the city of more than 7 million people and overthrow the Shiite-dominated government.

“We are training these ladies to make them ready if (ISIS) makes it into their neighborhood,” Abdullah said.

“They will be the ones who have to defend their home.”

Memories of past violence

Hassan remembers the sectarian fighting — Shiite vs. Sunni, sometimes neighbor vs. neighbor — at the height of the Iraq War that nearly tore the country apart.

Her older brother, 36-year-old Ali Hassan, was among the thousands who reportedly disappeared during the fighting.

The last time she ever saw him was the morning of May 28, 2007, when he left their home in Mahmoudiya, a Sunni-dominated city of about 500,000 people dubbed the “Gateway to Baghdad” because of its proximity to the Iraqi capital.

She doesn’t know what happened to him. But she and her family believe he was a victim of the sectarian fighting.

“Maybe somebody kidnapped him?” she says, looking down at the gun in her hand. “Maybe he was killed in an explosion?”

Ask any of the women, who range between the ages of 14 and 60, at the Badr Brigade training center if their family has a “martyr” — somebody who has been killed in the fighting — and nearly three-quarters of the hands go up.

Ask if any of them know of anybody who’s one, and everybody’s hands go up.

Jaffar Hassan is the man in the military uniform instructing the women. He is not related to Zahra Hassan, but she could be his daughter.

By the time the week is done, he says, the women will be proficient enough to protect themselves and, if necessary, kill.

Teen learning to protect her family

Fourteen-year-old Ageel Fadhil sits against the trunk of a towering date palm, listening to Hassan. An AK-47 lays across her lap.

Her tender age is evident by the white hijab she wears. The other women, all older, wear hijabs in dark colors. Her mother, Shama, already knows how to use the weapon. She is an Iraqi police officer, one of the thousands of women who were trained in such roles when the U.S. military was standing up Iraq’s military.

She also was among the first to complete the Badr Brigade training, and today she is helping to instruct the women at the training center to handle the weapons.

Ageel must learn how to protect the family, specifically her 7-year-old brother Ali, she says. “When her father and I are at work, what is she going to do if someone comes in the house to kill them?”

With school out for the summer, most of Ageel’s friends, she says, are watching television and reading magazines. She asked them to volunteer with her, but only a few did, she said.

When its Ageel’s turn to fire, she moves to the front of the group.

“So I take aim like this, and I get ready to fire,” Hassan says, lifting the AK-47 and leveling it toward the trees. “Then I fire.”

He hands it to Ageel, who follows his instruction. She squeezes the trigger. Bang!

Nice shot, he tells her.

Her mother, wearing a green camouflage headscarf that matches her uniform, smiles at her and gently pats her on her back.

It’s not what a mother wishes for her daughter, Shama Fadhil said. “But in Iraq, this is the reality.”

By the end of the lesson, Ageel appears more at ease with the AK-47, cradling the weapon in her arm — just like she has seen soldiers on the streets do.

But could she kill somebody? Could she point the gun at somebody and pull the trigger?

She thinks about the questions for a moment and then looks to her mother before she answers.