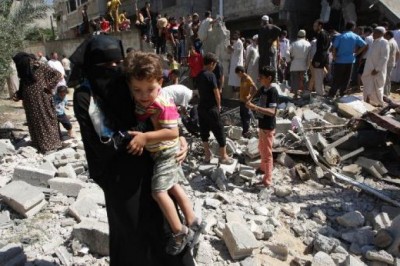 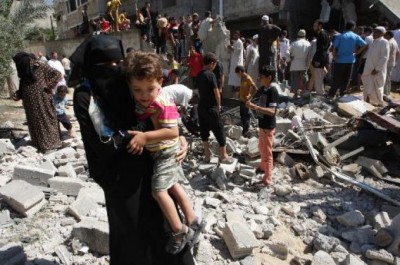 The Israeli army on Wednesday intensified its offensive on the Hamas-run Gaza Strip, striking Hamas sites and killing at least 8 people on the second day of a military operation it says is aimed at quenching rocket fire against Israel.

The offensive has set off the heaviest fighting between Israel and the Islamic militant group Hamas since an eight-day battle in November 2012. Militants unleashed rocket salvos deep into Israeli territory, and Israel mobilized thousands of forces along the Gaza border for a possible ground invasion into the Palestinian territory.

Since the offensive began Tuesday, Israel has attacked more than 400 sites in Gaza, killing at least 32 people. The strikes from air and sea came after militants fired more than 160 rockets at Israel, including one that reached the northern Israeli city of Hadera for the first time. The city is about 60 miles from Gaza.

The army said it attacked more than 160 sites in Gaza early Wednesday, including 118 concealed rockets launching sites, six Hamas compounds – including naval police and national security compounds — 10 militant command centers, weapons storage facilities and 10 tunnels used for militant activity and to ferry supplies in from Egypt. The border between Gaza and Egypt has effectively been closed for months.

Gaza health official Ashraf Al-Kedra said Wednesday’s airstrikes killed one militant in south Gaza, as well as an Islamic Jihad operative, his mother, and four siblings in northern Gaza. Another man was killed on a motorcycle, but his identity was not immediately known.

But as CBS News’ Holly Williams reports, Palestinian officials say the number of civilians killed in the strikes is also climbing. One health worker said 25 civilians died on Tuesday, including some children.

Only four rockets were fired from Gaza toward Israel overnight, the army said, a significant decline from the large number that hit Israeli cities the night before, setting off air raid sirens in Jerusalem, Tel Aviv and other areas of the country.

Air raid sirens sounded in Tel Aviv and Israel’s south early Wednesday, and the army said two rockets were apparently intercepted above the central Israeli city by an anti-missile battery.

Lt. Col. Peter Lerner, an army spokesman, told reporters the military’s aim was to take a “substantial toll” on Hamas and to deplete its rocket capabilities. He said the army would gradually ramp up its strikes on Gaza.

“The organization is going to pay for its aggression. It is literally holding us hostage with its rockets,” Lerner said. “The country is not willing for this situation to continue.”

Palestinian President Mahmoud Abbas called from the West Bank on the international community and the United Nations to “provide international protection for our people.” He said in a televised statement late Tuesday that Hamas leaders in Gaza want to restore calm.

“I have been in contact with the regional and international parties in the last few days, particularly Hamas leaders in Gaza, and everyone I’ve talked to expressed his willingness to restore the truce and stop the escalation,” Abbas said. He called the Israeli offensive on Gaza an “orchestrated and brutal aggression.”