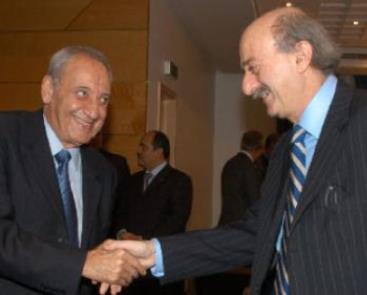 Lebanon Speaker Nabih Berri   and  Progressive Socialist Party leader MP Walid Jumblatt agreed  on Saturday  that the  parliamentary elections should not  be staged before  the election of a new president, to replace Michel Suleiman whose term ended last may 25th,  al-Akhbar newspaper reported.

In May 2013, the parliament voted to extend its own mandate until November 20, 2014  after the rival political parties failed to reach  a deal on a new electoral law.

Almost all  MPs  from all blocs voted for the extension with the exception of  Change and Reform bloc, which is headed by MP Michel Aoun

The Lebanese lawmakers failed to elect a president on Wednesday, for the eighth time, to succeed president  Suleiman , prolonging a political vacuum as the country struggles with violence, economic decline and an influx of Syrian refugees.

Berri said he would postpone a vote for a new president until July 23 because not enough parliamentarians turned up to the assembly on Wednesday. Political groups have boycotted sessions in recent weeks and blamed each other for the deadlock.

Even though speaker Berri is a member of the march 8 alliance , he has been working closely with Jumblatt , who is now a centrist to try to end the deadlock.

The presidency was once the leading political office in Lebanon, but that power was eroded under the agreement which ended the country’s civil war, handing greater influence to the speaker  and prime minister.