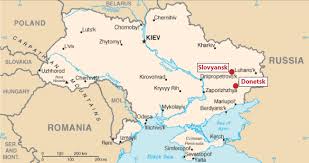 Ukraine’s president has hailed as the “start of a turning point” his troops’ success in driving out pro-Russian insurgents from a key rebel stronghold in the east.

Petro Poroshenko said the recapture of the city of Slovyansk was “not a total victory.” But he said in a statement posted online that the move carried symbolic significance and marked a turning point “in the battle against the rebels for the territorial integrity of Ukraine.”

After a night of heavy fighting, Ukrainian forces chased rebels from Slovyansk, which had been under the insurgents’ control since early April. The rebels vowed to regroup elsewhere and fight on.