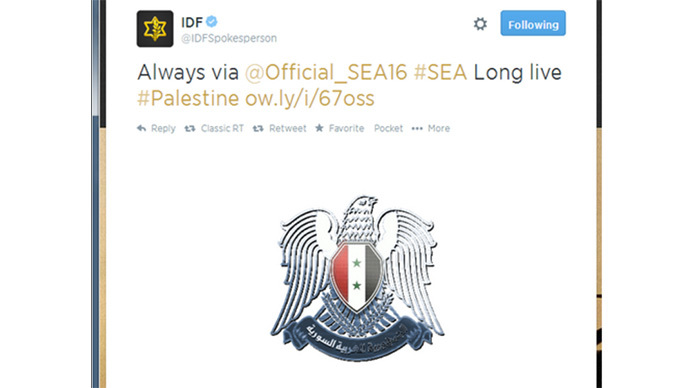 Internet hackers briefly took over an Israeli army Twitter account, the military said Friday, posting an alarming message that a nuclear facility had been hit by rocket fire. The Syrian Electronic Army has apparently taken credit for the hack, tweeting ‘Long live Palestine!’ via an IDF spokesperson’s account.

In their own twitter account, the hackers said they hacked the “whole ‘Israeli army’ propaganda”, attaching a screenshot to prove their claim.

“#WARNING: Possible nuclear leak in the region after 2 rockets hit Dimona nuclear facility” in the south of the country, it read.

The army told AFP that “several incorrect tweets were posted” on its English spokesperson’s account (@IDFspokesperson) late Thursday, saying the account had been “compromised.”

“We apologize for the incorrect tweets Our twitter account was compromised. We will combat terror on all fronts including the cyber dimension,” said the IDF via Twitter.

The tweets were deleted within minutes, but not before dozens of people had already retweeted the two hacked messages.

Internet hacking group the Syrian Electronic Army claimed responsibility, posting a screen shot of the army’s Twitter page with at least two of its fake tweets. 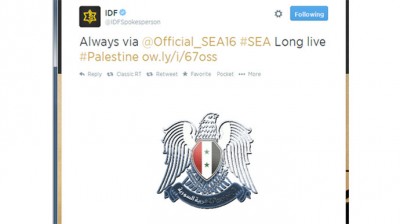 The Twitter hacking comes just days after the Syrian Electronic Army hacked the IDF’s official blog. On Sunday, the blog was showing a defaced page, with a message written in Arabic. The IDF has not commented on that hacki, according to Cyber News Alerts, who suspects the attack was a spear phishing attack.

The hacking came as Israel’s army gave regular updates on rocket fire from Gaza hitting southern Israel, after a brief uptick in the past week in cross-border exchanges, including retaliatory air strikes by Israel.

Israeli warplanes pounded targets inside Gaza on Thursday and militants fired at least 34 rockets into Israel, the army said.

Israel warned Hamas on Thursday to put a stop to rocket fire from its Gaza power base and sent army reinforcements to the border with the Palestinian enclave.