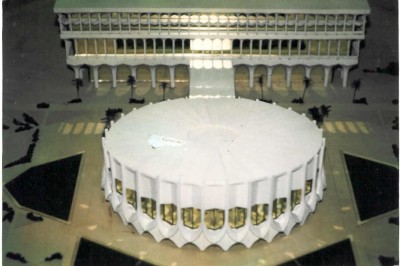 Insurgents brought down an army helicopter over the northern city of Tikrit on Sunday as the military sent in tanks to try to dislodge them on second day of a major pushback against a Sunni militant takeover of large stretches of Iraq.

In Baghdad, threatened by the rebel advance, top Shi’ite, Sunni and Kurdish lawmakers scrambled to agree cabinet nominations before parliament meets on Tuesday to try to prevent the rebel advance threatening Iraq’s future as a unitary state.

They are racing against time as Sunni insurgents led by the Islamic State in Iraq and the Levant (ISIL), an al Qaeda offshoot that loathes Prime Minister Nuri al-Maliki’s Shi’ite-led government, consolidate their grip on the north and west.

Maliki’s political future will be the most contentious issue.

Troops backed by helicopter gunships began the assault on Tikrit, the birthplace of former President Saddam Hussein, on Saturday, to try to take it back from insurgents who have swept to within driving range of Baghdad.

The army sent in tanks and helicopters to battle ISIL militants near the University of Tikrit in the city’s north on Sunday, security sources said. Two witnesses said they saw a military helicopter gunned down and crash near a market.

Iraqi army spokesman Qassim Atta told reporters in Baghdad security forces had killed 142 “terrorists” over the last 24 hours across Iraq, including 70 in Tikrit, and said the armed forces were in control of Tikrit’s university. Both claims were impossible to immediately verify.

“Our security forces have taken complete control of the University of Tikrit and they have raised the Iraqi flag on top of the building,” Atta said.

The offensive was the first major attempt by the army to retake territory after the United States sent up to 300 advisers, mostly special forces, and drones to help the government take on ISIL.

Earlier on Sunday, Deputy Prime Minister for Energy Hussain al-Shahristani, one of Iraq’s most senior politicians, faulted the U.S. for not doing enough to bolster the country’s military.

“Yes, there has been a delay from the Americans in handing over the contracted arms. We told them, ‘You once did an air bridge to send arms to your ally Israel, so why don’t you give us the contracted arms in time?'” he told al-Hurra television.

U.S. officials have disputed similar statements from Iraqi officials in the past and say they have done everything possible to ensure the country is equipped with modern weaponry.

In a sign of Iraq’s attempts to bolster its lackluster air force, five Russian Sukhoi jets were delivered to Baghdad late on Saturday, which state television said “would be used in the coming days to strike ISIL terrorist groups”.

A Reuters photographer saw the jets unloaded from a transport plane at a military airport in Baghdad as Russian and Iraqi soldiers stood on the tarmac. Iraq has relied largely on helicopters to counter militants and has few aircraft that can fire advanced missiles.

On Saturday, Iraqi troops launched an assault on Tikrit from the direction of Samarra to the south, where the military has drawn its line in the sand against the insurgents’ advance toward Baghdad. [ID:nL6N0P903F]

Atta, the military spokesman, said on Saturday militants were struggling because “their morale has started to collapse,” however, the insurgents seemed to be showing resilience with the backing of some local Sunni tribes. Insurgents retained control of the city on Sunday.

The clashes have taken their toll on civilians. At least four people were killed, including two women, when helicopters struck a gathering of people preparing for a wedding ceremony in Al Bu Hayazi, a village east of Tikrit on Saturday evening, witnesses and relatives of the victims said.

“Families were gathering to start a wedding party and rockets started to hit houses … The wedding became a funeral after the death of innocent people. My cousin was among those killed,” Hatam Ali, a government employee working in Tikrit university, told Reuters.

The military did not immediately respond to request for comment on the incident.

On Sunday, intermittent clashes broke out from the early morning between militants and government forces in the northeastern outskirts of the town of Jurf al-Sakhar, 53 miles(83 km) south of Baghdad.

The local government and security commanders have asked for backup from Baghdad to face what they estimate are several hundred ISIL fighters, police sources and the province’s governor said.

U.S. President Barack Obama has ruled out sending ground forces back to Iraq, where they were for eight years after invading to oust Saddam.

The militant group, which al Qaeda disowned this year, vows to re-create a medieval-style caliphate erasing borders from the Mediterranean to the Gulf and they deem all Shi’ites to be heretics deserving death.

Politicians are under pressure to speed up the normally sluggish process of selecting a new government to face the crisis. A parliament elected in April is due to be seated on Tuesday to begin the process.

In a statement on Sunday, the United Nations mission in Iraq urged all representatives to attend the session on Tuesday and move forward with selecting a new government.

“Faced with a national crisis, the political leaders of Iraq should put the interests of the country and its people before everything else,” Special Representative of the U.N. Secretary-General for Iraq Nickolay Mladenov said in the statement.

But already, there was evidence some would resist calls for a quick government formation process. The 21-seat bloc of former prime minister Iyad Allawi, a secular Shi’ite, announced it was skipping the session in two days. The bloc said more time was needed to avoid the mistakes of the last government.

Politicians from the National Alliance, parliament’s biggest bloc, said in a statement they were committed to joining the session and following the legal timetable for the formation, but were close-lipped about who they would back for prime minister.

Under Iraq’s governing system put in place after Saddam’s overthrow, the prime minister has always been a Shi’ite, the largely ceremonial president a Kurd and the speaker of parliament a Sunni. None of those groups has made a clear decision about who to put forward for the posts.

It took nearly 10 months for Maliki to build a coalition to stay in office after the last election in 2010, but officials say it can ill-afford such delays this time around.

In a stunning political intervention on Friday, Iraq’s most senior Shi’ite cleric Grand Ayatollah Ali Sistani, added his voice to the fray, making it clear politicians could not delay the process at a moment of crisis.

In a sermon read by his aide, Sistani urged political blocs to agree on the next premier, parliament speaker and president before a newly elected legislature meets in Baghdad on Tuesday.

Adnan Mufti, senior member of the Patriotic Union of Kurdistan (PUK), said they would join the session, but it was important to know the candidates for prime minister and speaker otherwise “the session will be for protocol.”

“At that time (when PM and speaker selected), the Kurdish parties must meet each other and select their candidate for president of Iraq. We haven’t until now,” he said.

In the past, the president has been from the PUK as part of a power-sharing deal with the Kurdistan Democratic Party but officials say this will not necessarily be the case this time.

Sunnis, long riven by intense rivalries and shaken by the loss of their cities to militants, are similarly divided among themselves over the speaker’s post. But it is the fate of Maliki, who Sunnis accuse of marginalizing them, that will likely be the most contentious issue.

Maliki, whose State of Law coalition won the most seats in the April election, was positioning himself for a third term before the ISIL offensive began. His closest allies say he still aims to stay, but senior State of Law figures have said he could be replaced with a less polarizing figure.

“It’s a card game and State of Law plays a poker game very well,” an official from the premier’s alliance said. “For the prime minister, it will go down to the wire.”