Kerry: Syrian moderate rebels could help in fight against extremists 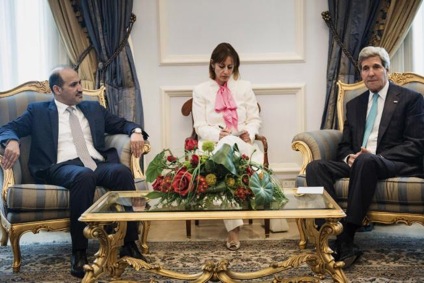 Jeddah, KSA- Secretary of State John Kerry signaled on Friday that the U.S. hopes to enlist moderate Syrian opposition fighters that the Obama administration has reluctantly decided to arm and train in the battle against militant extremists in neighboring Iraq.

Obama sent Congress a $500 million request Thursday for a Pentagon-run program that would significantly expand previous covert efforts to arm rebels fighting both the Sunni extremists and forces loyal to Syrian President Bashar Assad. The move that comes amid increased U.S. concern that the conflicts in Syria and Iraq are becoming an intertwined fight against the same Sunni extremist group.

If approved by lawmakers, the program would in effect open a second front in the fight against militants with the Islamic State of Iraq and the Levant, or ISIL, that is spilling over Syria’s border and threatening to overwhelm Iraq.

“Obviously, in light of what has happened in Iraq, we have even more to talk about in terms of the moderate opposition in Syria, which has the ability to be a very important player in pushing back against ISIL’s presence and to have them not just in Syria, but also in Iraq,” Kerry said at the start of a meeting with Syrian opposition leader Ahmad al-Jarba.

Al-Jarba thanked the Obama administration for requesting the $500 million, but said his rebels want even more foreign aid to fight two fronts: a bloody insurgency and their so-far unsuccessful effort to oust Assad.

“We still need greater assistance,” al-Jarba said, speaking through a translator. “We hope for greater cooperation with the U.S.” He said General Abdullah al-Bashir, the head of the military wing of the Syrian opposition, “is ready to cooperate with the U.S. side.”

Al-Jarba called the crisis that has gripped Iraq in the last month “very grave” and blamed Iraqi Prime Minister Nouri al-Maliki for policies that he said have divided the country. Iraq is 60 percent Shiite, and the rest nearly evenly split between minority Sunnis and Kurds. Iraqi Sunnis, who enjoyed far greater privileges during Saddam Hussein’s regime, have decried al-Maliki’s leadership and accused him of sidelining minority groups from power.

Kerry traveled through the Mideast over the last week to try to broker a political agreement with Iraqi leaders to give more authority to Sunnis in hopes of easing sectarian tensions and, in turn, help quell the dominantly Sunni insurgency.

Kerry also met with King Abdullah of Saudi Arabia, where it was expected he would seek the monarch’s help in supporting Sunni efforts to combat the Sunni insurgency. More than 90 percent of Saudi Arabians are Sunni Muslims.

Obama has long been reluctant to arm the Syrian opposition, in part because of concerns that weapons may fall into extremist hands, a risk that appears to have only heightened now that ISIL has strengthened. But Obama’s request to Congress appeared to indicate that tackling the crumbling security situation in Syria and Iraq trumped those concerns.

White House spokeswoman Caitlin Hayden said the military assistance “marks another step toward helping the Syrian people defend themselves against regime attacks, push back against the growing number of extremists like ISIL who find safe haven in the chaos, and take their future into their own hands by enhancing security and stability at local levels.”