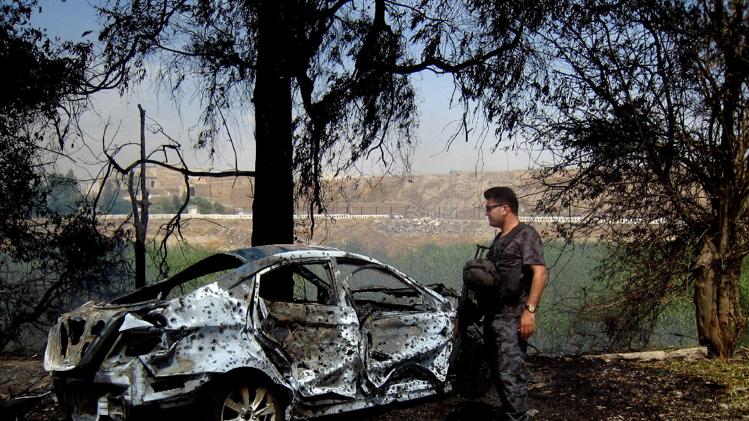 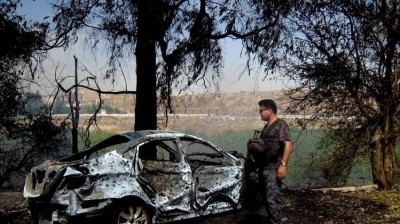 Iraqi Prime Minister Nuri al-Maliki, who is fighting for his job and is under international pressure to create a more inclusive government, said he supported starting the process of forming a new cabinet within a week.

He also dismissed the call of mainly Sunni political and religious figures, some with links to armed groups fighting Maliki, for a “national salvation government” that would choose figures to lead the country and, in effect, bypass the election held nearly three months ago.

In northern Iraq, the Sunni militants extended a two-week advance that has been led by the hardline Islamic State of Iraq and the Levant (ISIL) but also includes an amalgam of other Sunni groups angered by Maliki’s rule.

They blame Maliki for marginalizing their sect during eight years in power. The fighting threatens to rupture the country two and a half years after the end of U.S. occupation.

U.S. Secretary of State John Kerry during a visit this week pressed Iraqi officials to form an “inclusive” government and urged leaders of the autonomous Kurdish region to stand with Baghdad against the onslaught.

A session of parliament is planned within a week that will start the process of forming a new government based on the results of elections held in April. Maliki’s Shi’ite-led State of Law coalition won the most seats but needs the support of other Shi’ite groups, Sunnis and Kurds to build a government.

“We will attend the first session of parliament,” Maliki said on state television, adding the commitment stemmed from “loyalty to our people” and respect for a call by Iraq’s foremost Shi’ite clergy.

On Friday, Shi’ite Grand Ayatollah Ali al-Sistani, the most respected cleric among Iraq’s Shi’ite majority, called for the government formation process to begin.

He also warned the demands by mainly Sunni politicians and figures, with ties to the non-ISIL fighting groups who belong to the armed revolt against Baghdad, that calling for an emergency government, not based on the vote, “represents a coup against the constitution.”

The fighting waged by armed Sunni groups, with ISIL blazing the path, has knocked towns and cities across the north and west from the central government’s control. Northern Iraq’s largest city Mosul fell to Sunni insurgents on June 10.

Two days later, Kurdish forces moved into Kirkuk, where violence also flared on Wednesday when a suicide bomber blew himself up at a crowded market entrance, killing six people and wounding 23, police and medics said.

The United Nations says more than 1,000 people, mainly civilians, have been killed during the Sunni insurgents’ advance in Iraq, spearheaded by al Qaeda offshoot ISIL.

The figure includes unarmed government troops machine-gunned in mass graves by insurgents, as well as several reported incidents of prisoners killed in their cells by retreating government forces.

In addition to the bloodshed, close to a million people have been displaced in Iraq this year. Amin Awad, director of Middle East and North Africa bureau for the U.N. refugee agency, on Wednesday called Iraq “a land of displacement”.

U.S. President Barack Obama has ruled out sending ground troops back to Iraq where they withdrew in 2011. He has offered up to 300 American military advisers, about 130 of whom have now been deployed. The advisers could gather information about targets for future air strikes although no decision has been taken to start American bombing.

Baghdad is racing against time as the insurgents consolidate their grip on Sunni provinces.

On Wednesday, militants overran the Ajeel oil site, 30 km (20 miles) east of Tikrit, which contains at least three small oilfields that produce 28,000 barrels per day, an engineer working at the field said.

The engineer said local tribes had taken responsibility for protecting the fields after police withdrew, but that they also left after the nearby town of al-Alam was seized by militants.

Ajeel is connected to two pipelines, one running to Turkey’s Ceyhan port and the other to the Baiji oil refinery, which remained a frontline early on Wednesday.

State TV showed troop reinforcements being flown into the compound by helicopter to fend off the assault on Baiji, a strategic industrial complex 200 km north of Baghdad.

Local tribal leaders said they were negotiating with both the Shi’ite-led government and Sunni fighters to allow the tribes to run the plant if Iraqi forces withdraw. One government official said Baghdad wanted the tribes to break with ISIL and other Sunni armed factions, and help defend the compound.

The plant has been fought over since last Wednesday, with sudden reversals for both sides and no clear winner so far.

The suicide bomber in Kirkuk blew himself up when police stopped him as he tried to enter the crowded market in a mostly Kurdish neighborhood, police said. It was the first such attack since Kurdish forces occupied the city two weeks ago.

“The suicide attacker was wearing Kurdish dress. Kurdish security forces suspected he was hiding something under his clothes, and when they tried to stop him at the entrance to search him, he blew himself up,” a Kurdish security source said.

Militants including ISIL and allied Sunni tribes battled Iraqi forces in the town of Yathrib, 90 km north of Baghdad, into the early hours of Wednesday, witnesses and the deputy head of the municipality said. Four militants were killed, they said.

Insurgents have surrounded a massive air base nearby, which was known as “Camp Anaconda” under U.S. occupation, and struck it with mortars. Witnesses said the air base had been surrounded on three sides.

In recent days, Baghdad’s grip on the Western frontier with Syria and Jordan has also been challenged.

One post on the Syrian border has fallen to Sunni militants and another has been taken over by Kurds. A third crossing with Syria and the only crossing with Jordan are contested, with anti-government fighters and Baghdad both claiming control.

For ISIL, capturing the frontier is a step towards the goal of erasing the modern border altogether and building a caliphate across swathes of Iraq and Syria.

The group gained another boost in that direction when members of Syria’s al Qaeda wing, the Nusra Front, pledged allegiance to it in the border town of Albu Kamal, strengthening its control of the frontier.

ISIL supporters posted images online of what they said were Nusra fighters taking an oath of loyalty to ISIL in the town.

ISIL and the Nusra Front share hardline Sunni ideology but have periodically fought against each other in Syria.

An Iraqi military spokesman said on Tuesday the government had carried out air strikes on a militant gathering in the town of al-Qaim near the Syrian border, which is under the control of the coalition of Sunni armed groups, including ISIL.

Locals in al-Qaim and security officials in western Anbar province accused Syria of carrying out the air raid. The Syrian government officially denied the attack, but others in the security establishment there said they had carried out the strike. A senior Iraqi government official also said late Wednesday Syria had carried out the bombardment. If true, the bombardment could preherald a more overt interventionist stance by Iraq’s neighbors.

Meanwhile, Iraqi security forces and insurgents clashed to the west of Haditha, home of a critical dam, that Sunni fighters wish to claim. Since Qaim and the border fell, the fighters have begun marching up the Euphrates River Valley.

They have clashed over the Haditha Dam for four days. “Things are under the control of the tribes and police and army. We would rather die than give up the dam,” said the local police chief, who called himself Farouq.

In Mosul, which has been under the control of ISIL and other insurgents for over two weeks, militants bombed a Shi’ite mosque in the Sharekhan neighborhood in the city’s northern outskirts, residents said.