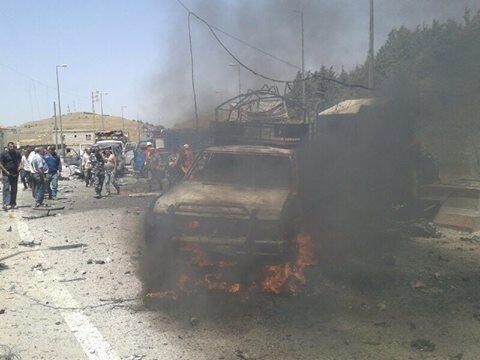 A suicide bomb attack targeted a police checkpoint on Friday in east Lebanon on the Beirut-Damascus highway, killing one police officer and wounding 33 people, the Daily Starreported.

The attack took place shortly after security forces (ISF) raided a Beirut hotel, detaining 17 terror suspects and one on the loose, allegedly linked to a plot to assassinate Speaker of Parliament Nabih Berri. Although 13 of the suspects were released again, four remain detained with suspected ISIS associations. As analysts told the Lebanese newspaper The Daily Star, “Lebanon is poised for a new wave of bombings linked to the turmoil in Iraq and Syria.”

General Security chief Maj. Gen. Abbas Ibrahim said he barely escaped an attack in Dahr al-Baidar when a bomb detonated merely 200 meters away from his convoy. “The explosion in Dahr al-Baidar occurred moments after my convoy passed through the checkpoint,” Ibrahim told a local television station.

Earlier this month, as the Al-Qaeda-inspired Islamic State of Iraq and Greater Syria (ISIS) or ISIL in Iraq gained ground, Lebanon has seen repercussions across the political landscape, in a country already experiencing heated domestic crises revived by the neighbouring Syrian civil war spilling over onto its land. A security source told the newspaper that security agencies had received intelligence that ISIS members were preparing a suicide attack in Lebanon.

“Today’s attack in Dahr al-Baidar is a message from ISIS that the battle is not limited only to Iraq, but it will also stretch to Syria and Lebanon,” Sami Nader, a professor of economics and international relations at Université St. Joseph, told The Daily Star. He said the hope of the ISIS battle is in the “Levant arena” which, in the militant group’s ideology includes Syria, Iraq, Jordan, Palestine and Lebanon.

“Following ISIS’s recent military gains in Iraq, Lebanon is facing the threat of Iraqization if real measures are not taken to shield the country from a spillover of the war in Iraq,” Nader said. Among these measures, he said, is “inclusive domestic politics with the participation of former Prime Minister Saad Hariri, filling the presidential vacuum with the election of a new president and forming a new government to face tough political, economic and security challenges.”

Analyst Qassem Kassir explained how the attack “indicated that ISIS has decided to open the Lebanon front basking on the glory of its military advances in Iraq.” Lebanon has always been targeted by militant, takfiri and jihadist groups and according to Kassir, “these groups, which went underground following the Lebanese Army’s successful campaign to crack down on terror organizations, might move now to carry out terror attacks emboldened by ISIS’ gains in Iraq,” he warned.

The Daily Star reported that ISIS and other Al-Qaeda-linked groups have already claimed responsibility for the deadly car bombings and suicide attacks that targeted areas in Beirut’s southern suburbs earlier this year, as well as the Bekaa Valley region where Hezbollah enjoys wide support in response to the party’s military intervention in Syria.