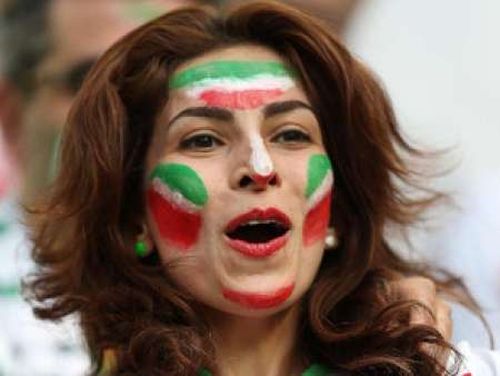 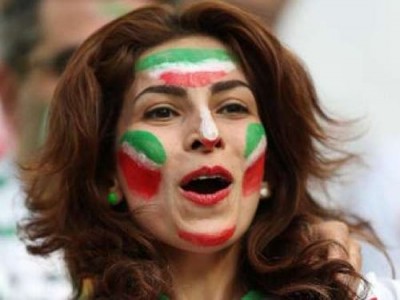 Iran’s national soccer team lost to world power Argentina 1-0 today, as superstar Lionel Messi scored in stoppage time to break the hearts of the thousands of Iranian fans in the stands and millions at home.

Iran has one of the largest contingents of fans in Brazil for the tournament, and judging by how the ladies are dressed, one might understand — from the Iranian authorities point of view — why they don’t want the sexes mixing in public. Images of the hijab-less Iranian women went viral and authorities were none too pleased, despite going so far as sending a minder to make sure the tourists to Brazil acted in an Islamic fashion.

Although Iranian women were warned to not dress “immodestly” when they appear in public in Brazil, scores of football fans took to the streets to attend the match between Iran and Nigeria, which ended in a 0-0 draw.

According to Al-Arabiya news, conservative officials in Iran told citizens traveling to Brazil to avoid any actions which may be deemed “incompatible” with the Islamic Republic’s values. Furthermore, those who traveled had to sign an agreement stating they would agree to adhere to these values while abroad.

Despite the Islamic regime’s hardline stance on the matter, pictures posted on twitter and Facebook show Iranian fans enjoying the World Cup celebrations in the same way as those from other countries. 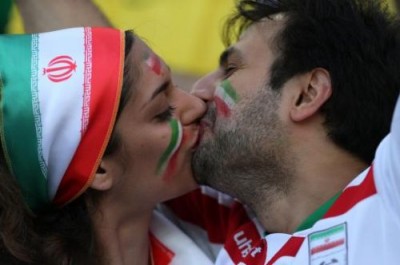 While the game was broadcast on television, the authorities forbade cafes, cinemas, and other public places from airing the game. The reason? The mixing of sexes is “unislamic.”

Yet, this does not stop football-loving Iranians from wanting to watch their team. Many universities and schools even rescheduled exams so that students could cheer on Team Melli.

This makes the police restrictions, communicated directly to restaurant and cinema owners, all the more confusing.

“We told our members not to turn on their TVs when World Cup matches are being broadcast or to make sure TVs are set to a different channel,” said Eskandar Azmodeh, the head of Tehran’s Union of Cafe Owners.

“It is possible that owners could lose their licences if any problems arise in their cafes while showing the games.”

Iranian state media reported that police text messages to restaurant owners said they had to close by midnight as usual.

Cinemas were told they would not be allowed to screen matches to mixed-gender audiences.

Police would have let them hold separate screenings for men and women but “due to the security issue we have given up showing the 2014 games”, said the head of the Iranian Cinema Owners Association, Mohammad Ghasem Ashrafi.

Watching football in cinemas became popular during the 2010 World Cup and Euro 2012.

“They make everything about boys and girls,” said Parvin, 56, a retired chemistry teacher. “I used to go to the cinema four years ago to watch the World Cup with my daughter and son. I saw so many other parents there too.”

The new restrictions mean most Iranians will have to watch the World Cup, shown free on state TV, at home. Viewing the matches outdoors in public parks was also popular, but this now appears to be out of favour as authorities have not set up any facilities for it this time.

Iran is one of the most literate countries in the world, and the people there are not stupid. Authorities may seek to keep the outside world from intruding on their little Islamic paradise, but it can’t be done. Iranian women watching their sisters behave so freely in Brazil must be wondering why things have to be so different at home.

As the Soviet Union discovered when they initiated the reform program known as perestroika, you can’t give people a little bit of freedom and expect them to be satisfied. The 2009 protests showed there is a deep unhappiness among Iranians of all political persuasions. President Hassan Rouhani was elected partially as a response to that unrest, but even if he was for basic reforms — a dubious proposition given his standing in the Iranian theocracy — his hands would be tied by the old guard of mullahs who run Iran like a 8th century caliphate. There can be no reform because Islam is perfect and nothing needs to change.

One wonders if those exuberant women in Brazil with painted faces and “unislamic” demonstrations of joy will suffer the consequences of disobeying the authorities when they get home. You also have to wonder if there will ever come a day when such demonstrations won’t be out of the ordinary.