Couple rows 6,500 miles in a very angry sea from Morocco to NYC

A South African couple made a big splash Friday when they capped an incredible six-month, 6,500-mile journey from Morocco to the Big Apple — via row boat.

Riaan Manser and longtime girlfriend Vasti Geldenhuys made the arduous trek in a small — but high-tech — 23-foot row boat called “Spirit of Madiba” starting on Dec. 30 and ending Friday at the Statue of Liberty.

“We were naïve. We thought the Atlantic would be this calm little pond that you just row across,” said Manser, 40, sporting a long beard and shaggy hair. “By the fifth day, we were saying to each other, what is going on? Goodness gracious. It should be a lot calmer. The sea was very, very, very angry.”

The exhausted, sun-kissed couple was tugged uptown to the 79th Street Boat Basin Friday afternoon where they were greeted by a throng of supporters, including the mayor of Johannesburg.

The globetrotters, who have been together for 15 years, estimated it took 3.6 million rows between them to reach New York. The strenuous workout began early in the morning and lasted for eight hours – split between four-hour blocks – a day.

During their voyage, they stopped off at the Canary Islands in late December and, two and a half months later, the Bahamas, where Manser tweeted a pic of them swimming with wild pigs.

In May, they reached Miami and rested for a couple days before embarking on the last leg of their trip — about 1,500 miles — to New York.

They also went through 2 liters of sunscreen, which they wore every day, and used their lifejackets as pillows. 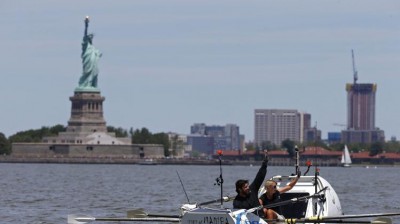 The nomads’ journey at times was harrowing – their boat capsized in February and they had close encounters with massive cruise ships, with which they had no way of communicating.

On one terrifying occasion, Manser got separated from the boat while swimming alongside it.

For food, Manser and Geldenhuys relied on a small supply they had brought on board, but they also feasted on fresh-caught fish.

They said their salt-water converter broke during the trip between Miami and New York, forcing them to flag down a larger ship to ask for fresh water.

Manser, a die-hard adventurer who’s biked the entire perimeter of Africa, documented the journey on Twitter. A little after 1 p.m. Friday, he tweeted a pic of himself and Geldenhuys, a lawyer, with broad smiles and Lady Liberty in the background.

“We made it! Thanks everyone,” he tweeted.