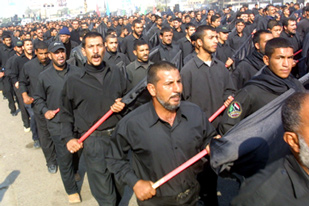 The Mahdi army is a Shiite group led by cleric Muqtada al-Sadr . It was formed after the US invasion.
Share:
A high-level Shiite cleric in Iraq issued a warning to American military advisers bound for Iraq Friday, hours before Sunni militants captured a crossing on Iraq’s border with Syria and Shiite militia members paraded in Baghdad and other cities.

Sky News reports that Nassir al-Saedi, a cleric loyal to the firebrand Muqtada al-Sadr, referred to America as “the occupier” in a sermon during Friday prayers and added “We will be ready for you if you are back.”

On Thursday, President Barack Obama announced that the U.S. would send 300 military advisers to provide intelligence and training to the Iraqi army in its fight against the Islamic State in Iraq and the Levant (ISIS), a group that has already taken wide swathes of territory in Iraq’s north and west.

But the Shiite militias formed in response to the current ISIS offensive could represent a dangerous wild card in the new battle for Iraq. The Mahdi Army, a militia loyal to al-Sadr, battled U.S. troops and was blamed for attacks on Sunni civilians during the height of the country’s sectarian bloodletting in 2006 and 2007. The same was true of several Iran-backed militias in the years prior to the American withdrawal in 2011. Last week, in the wake of the capture of the cities of Mosul and Tikrit by ISIS, al-Sadr has called for the formation of “peace brigades” to repel attacks on sites holy to Shiites across Iraq.

On Saturday, about 20,000 men, many in combat gear, marched through Baghdad’s Sadr City district with assault rifles, machine-guns, multiple rocket launchers and missiles. Similar parades were held in the southern cities of Amarah and Basra, with the militants in Basra displaying field artillery pieces hauled by heavy trucks.

Meanwhile, ISIS militants seized the border crossing at Qaim, about 200 miles west of Baghdad, dealing a further blow to Prime Minister Nouri al-Maliki’s government, which has struggled to push back against the group

Police and army officials said the town fell after an all-day battle between police and Iraqi security forces Friday.

The officials, who spoke on condition of anonymity because they were not authorized to talk to media, said people were now crossing back and forth freely. Control of crossings allows the militans to more easily move weapons and heavy equipment to different battlefields.

The fall of the border crossing came as al-Maliki faces mounting pressure to form an inclusive government or step aside, with both Shiite Grand Ayatollah Ali al-Sistani and the White House strongly hinting he is in part to blame for the worst crisis since U.S. troops withdrew from the country at the end of 2011.

If al-Maliki were to relinquish his post now, according to the constitution the president, Jalal Talabani, a Kurd, would assume the job until a new prime minister is elected. But the ailing Talabani has been in Germany for treatment since 2012, so his deputy, Khudeir al-Khuzaie, a Shiite, would step in for him.

Shiite politicians familiar with the secretive efforts to remove al-Maliki said two names mentioned as replacements are former vice president Adel Abdul-Mahdi, a Shiite and French-educated economist, and Ayad Allawi, a secular Shiite who served as Iraq’s first prime minister after Saddam Hussein’s ouster. Others include Ahmad Chalabi, a one-time Washington favorite to lead Iraq, and Bayan Jabr, another Shiite who served as finance and interior minister under al-Maliki.