Iraqi Kurds deliver oil to Israel despite threats by Baghdad 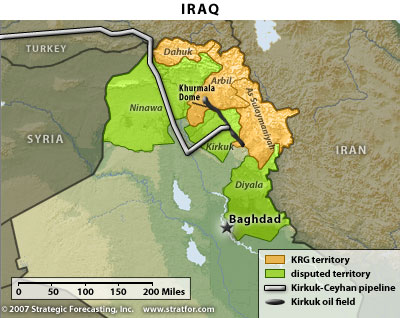 A tanker delivered a cargo of disputed crude oil from Iraqi Kurdistan’s new pipeline for the first time on Friday in Israel, despite threats by Baghdad to take legal action against any buyer.

The SCF Altai tanker arrived at Israel’s Ashkelon port early on Friday morning, ship tracking and industry sources said. By the evening, the tanker began unloading the Kurdish oil, a source at the port said.

Securing the first sale of oil from its independent pipeline is crucial for the Kurdish Regional Government (KRG) as it seeks greater financial independence from war-torn Iraq.

But the new export route to the Turkish port of Ceyhan, designed to bypass Baghdad’s federal pipeline system, has created a bitter dispute over oil sale rights between the central government and the Kurds.

Reuters was not able to confirm whether the KRG sold the oil directly to a buyer in Israel or to another party. Oil cargoes often change hands multiple times before reaching their final destination.

The United States, Israel’s closest ally, does not support independent oil sales by the Kurdish region and has warned possible buyers against accepting the cargoes.

Israeli leaders have been alarmed in recent months, however, by signs of a possible rapprochement between Washington and Iran.

Officials said Israel was keen to build good ties with the Kurds, hoping to expand its limited diplomatic network in the Middle East and broaden options for energy supplies.

It was not clear whether the crude in the SCF Altai has been sold to a local refiner or was slated to discharge into storage, potentially for another destination.

“We do not comment on the origin of crude oil being imported by the private refineries in Israel,” an Israeli energy ministry spokeswoman said.

The first tanker to carry Kurdish pipeline oil is still homeless after loading in May. After a false start sailing to the United States, the United Leadership tanker turned back towards Morocco, where it is anchored after local authorities refused to let it discharge for the Mohammedia refinery.

The SCF Altai did not arrive directly from Ceyhan.

The United Emblem was the second tanker to load crude at Ceyhan from the KRG pipeline at the start of last week. It then made a ship-to-ship transfer near Malta to the SCF Altai during June 14-16, several Maltese shipping and market sources said and ship tracking showed.

A third tanker was loading 1 million barrels of oil from the pipeline, a source at the Turkish ministry said on Friday.

Several market sources said the United Emblem tanker, which loaded the second batch, had gone back to Ceyhan to load the third cargo. Ship tracking showed the tanker berthed at one of the Ceyhan jetties on Friday.

Israeli refineries have taken Kurdish crude oil before but in small volumes, which were shipped to Turkish ports by truck. Some oil has also been stored there.

The KRG began exporting a small volume of its Taq Taq crude grade by truck to Turkey in early 2013 and then added another grade Shaikan at the start of this year.

Israel has less to lose than other U.S. or European refiners, because it has no contract for Iraqi oil. Iraq participates in the boycott of Israel along with many other Arab states.

Italy has warned traders and refineries about the legal risks of importing the oil. Large companies with oilfield interests in southern Iraq have stayed clear, although a joint refining venture by Rosneft and BP used a cargo of trucked oil in May.

The KRG’s pipeline is currently pumping around 120,000 barrels per day to Ceyhan. The region’s natural resources minister is aiming to export 400,000 bpd by year-end.

Emboldened by its takeover of the major Kirkuk oilfield in northern Iraq, the KRG is also openly talking about the potential of exporting this oil through its pipeline as well after Kirkuk’s usual pipeline outlet was sabotaged.