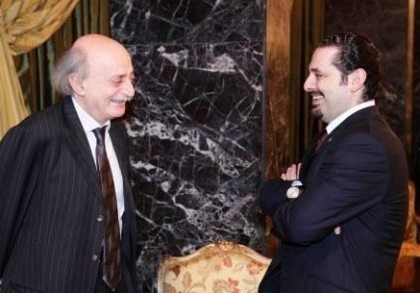 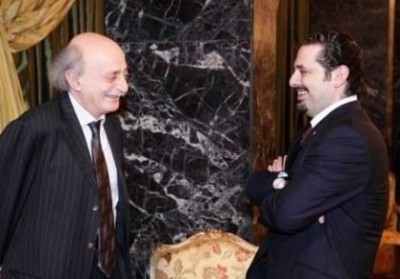 The media office of the Progressive Socialist Party ( PSP) issued a statement in which it said that the meeting between PSP leader MP Walid Jumblatt and former Prime Minister and Future Movement leader MP Saad Hariri in Paris, in the presence of Health Minister Wael Abu Faour and Nader Hariri was “positive and frank”

“The meeting tackled the latest local and regional political developments “, the statement added
According to the statement both parties affirmed the need to develop bilateral relations between the Progressive Socialist Party and the Future Movement and to coordinate efforts with regards to the presidential elections in order to avoid prolonged vacuum at the top Lebanese post.

Paris witnessed on Friday the long awaited meeting between Jumblatt and Hariri . This is the first between the two leaders in over one year, according to reports.

Health Minister Wael Abou Faour who accompanied Jumblatt to the French capital has been preparing for this meeting . Last week he went to the Moroccan city of Casablanca where he met with Hariri as part of the preparation for Friday’s meeting.

Jumblatt was expected to focus in his discussions on the presidential election and was planning go over a list of possible consensus candidates. According to well informed sources he vowed not to return to Lebanon without securing a deal with Hariri on a possible candidate .

The Lebanese parliament failed again for the seventh time in a row to hold a session to elect the country’s new president to replace Suleiman whose term ended on May 25.

After Geagea secured 48 votes last April 23, the Hezbollah led March 8 alliance including Aoun and Suleiman Franjieh walked out from the parliament to make sure there was no quorum to elect a president. They continued their boycott of the parliament during the 6 other sessions that followed .

Aoun has not announced his candidacy but he aspires to become a consensual nominee and has reportedly been waiting for Hariri to endorse him , but so far the Future Movement leader along with his March 14 allies is sticking with Geagea.

On Thursday Jumblatt derided the endorsement of Aoun for presidency by the embattled Syrian president Basher al Assad by asserting that this is not something to be proud of:

“It is not an honor for anyone to receive Bashar’s support.” Jumblatt told the Egyptian daily al-Ahram stressing this is a Lebanese issue and Assad has no influence on the outcome.

“We will have the final word in this matter,” Jumblatt who wields a critical swing vote in Lebanon parliament said.

Jumblatt reiterated his support for the nomination of his parliamentary bloc member MP Henri Helou for the presidency, stressing that he is a moderate when compared to other nominees and will not withdraw his nomination.

“We will not withdraw Helou’s nomination for the sake of others regardless of what agreements are made. This is democracy.” Jumblatt told the daily.

According to analysts the PSP statement as presented was expected but so far no details have been leaked to the media to know exactly what the 2 leaders agreed on .