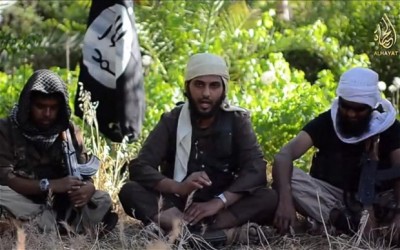 Abu Dujana al Hindi (left), Nasser Muthana from Cardiff (centre) and Abu Bara al Hindi (right)
Share:
An aspiring Cardiff medical student was last night identified as the Briton at the centre of a campaign by an Islamic terror group to recruit would-be jihadists to Iraq and Syria.

Nasser Muthana, 20, appeared in a propaganda video by the Islamic State of Iraq and al-Sham [Isis] urging others to join him.

His father, Ahmed Muthana, told The Daily Telegraph last night that Nasser’s 17-year-old brother, Aseel, was fighting alongside him. He claimed his sons were “brainwashed” in Britain.

Mr Muthana said watching footage of his son had made him cry.

“I wish I could hold him, hold his hand, ask him to come back,” he said.

“As a father I give a message, not only to Nasser, to all the people that go from Britain to Syria to fight please stop. Come back home.”

Mr Muthana said his son had been accepted at four universities to study medicine but did not go, and he had not heard from him since November.

In February, the younger brother also disappeared after it is thought he applied for a second passport.

“To be honest, I don’t agree with him but I don’t know what he has been taught in his mind,” he said.

“Of course I fear he will be injured or die fighting but I can do nothing. They are conservative Muslim, they don’t have girlfriends, they don’t talk to girls.”

In the video, a professional piece of propaganda for the extremist group which emerged yesterday, Muthana was identified by an alias, Abu Muthanna al-Yemeni. He said that although he was being filmed in Syria, he promised to take the fight to Iraq. He was one of three men thought to be Britons who appeared in the film.

Other evidence suggests that British fanatics are at the heart of a global Islamist jihad, playing key roles in trying to recruit young Muslims to Iraq and other extremist hotbeds.

In a separate case in the United States, involving an FBI sting, it emerged that an unknown Briton was at the centre of a recruitment network to send would-be jihadists to Somalia, the base of the terror group al-Shabaab. Other Britons were already on the ground in Mogadishu to help “guide” any recruits sent out there, it was alleged.

In Iraq, The Daily Telegraph was shown photographs of a man believed to be the first Briton to be killed fighting in the civil war. The man was not identified but he is believed to be British of Arab origin, according to intelligence officials attached to the Peshmerga, the ethnic Kurdish forces holding up the advance of Isis across the north and east of the country.

One counter-terrorism expert yesterday said Britain had become a “hub” for international jihad and was “exporting” its expertise around the world in a legacy of the days of “Londonistan” when several extremists were given a home in the capital.

British Muslim leaders last night urged young people not to be lured by the fanatical propaganda as they condemned the actions of Isis in Iraq. Up to 450 Britons are already feared to be fighting with Isis in Syria or Iraq and the new recruitment drive could encourage hundreds more. Tracking the British jihadists is understood to be MI5’s top priority.

The Home Office last night said it would work with internet companies to stop terrorist messages being broadcast.

David Cameron, the Prime Minister, warned that tackling the threat posed by the Islamist militants would require “patient, long-term work”, and that “there are no easy answers”.

Isis has overrun large swathes of Iraq since taking the country’s second city, Mosul, last week. President Barack Obama has not ruled out the US taking military action against the group.

The group, which the retired US general David Petraeus has described as a “terrorist army”, is also causing alarm because of its adept propaganda machine, especially on social media.

In yesterday’s 13-minute Isis video, entitled “There is no life without Jihad”, the Britons called on their “brothers” to martyr themselves for Allah, adding: “You are going to die anyway.”

They said they were about to cross from Syria into Iraq to join the war, and Nasser Muthana said they were ready to take the fight to Jordan or Lebanon.

In an interview with The Daily Telegraph last night, Nasser’s father said: “These are not his views, [they are] somebody else’s views. I think he has been brainwashed in the UK, but I don’t know.”

Ahmed Muthana said his son had been accepted at four universities to study to be a doctor but did not go, and he had not heard from him since November.

The younger brother disappeared in February after apparently applying for a second passport.

Mr Muthana added: “To be honest, I don’t agree with him but I don’t know what he has been taught in his mind. Of course I fear he will be injured or die fighting but I can do nothing. They are conservative Muslim, they don’t have girlfriends, they don’t talk to girls.”

He said their mother had suffered a nervous breakdown after finding out about her sons. A spokesman for the family told ITV News that police visited two weeks ago, which was when they found out the brothers had gone.

Dr Zuhair al-Naher, a spokesman for the Iraqi prime minister, Nouri al-Maliki, described Isis as a “foreign extremist group of murderers”. He warned that the latest video showed that Isis respected no border, saying: “These terrorists will come back highly radicalised and militarised and they will come back to create a huge security threat.”

In the video, one of the men said to have been from Britain, posing with an automatic weapon on his shoulder, appealed directly for recruits. A caption identified him as Brother Abu Bara’ al-Hindi. “Are you willing to sacrifice the fat job you’ve got, the big car you’ve got, the family you have?” he asks. “Are you willing to sacrifice this for the sake of Allah? Definitely, if you sacrifice something for Allah, Allah will give you 700 times more than this.”

Another man, identified in a caption as Brother Abu Dujana al-Hindi, says: “Look around you while you sit in comfort and ask yourself, is this how you want to die? Know that you will be resurrected the way you lived your life.”

The role of Britons in global jihad was reinforced following the arrest of two Texas men this week.

Rahatul Khan, 23, a Bangladeshi-born American citizen, has been charged with conspiring to provide material support to terrorists by conspiring to recruit volunteers for “violent jihad” overseas.

Michael Wolfe, also 23, was arrested at Houston airport as he allegedly planned to travel with his family through Turkey to Syria to engage in “violent jihad”, possibly with Isis.

In the criminal complaint against Mr Khan, a student at the University of Texas, an undercover FBI source said an unnamed co-conspirator was introduced to him as a contact for “brothers” travelling from Britain to Somalia, apparently to fight with al-Shabaab. The co-conspirator told the FBI source, who posed as a US-based Somali who wanted to fight with the al-Qaeda-affiliated group, that “brothers from the UK … would guide” the source when he travelled to Somalia. Using codewords, the co-conspirator said that the FBI source would have to undergo training but that he would not have to travel to Britain for this, as the “brothers are already in the field in ‘Mog’ ” – taken to be a reference to the Somali capital, Mogadishu.

In a separate conversation, Mr Khan told the FBI source he had put “an individual in the UK” in contact with another co-conspirator who was involved in recruiting jihadists from the West.

Mr Khan allegedly looked for and talked with potential recruits in a chatroom on a website devoted to the teachings and sermons of a hate preacher who was once based in London.

Abdullah Ibrahim al-Faisal, a Jamaican-born former Brixton imam who moved to this country in 1991, was sentenced to seven years in jail in 2003 for soliciting the murder of Jews, Hindus and Christians and inciting hatred and violence. Faisal, who was deported after four years to Jamaica, was an associate of Abu Hamza, the cleric who was convicted in the US last month on a series of terrorism charges including trying to set up a terrorist training camp in Oregon while living in the UK.

Hamza and Faisal were among a number of extremists given a home in the UK during the Nineties whose firebrand sermons helped earn the capital the nickname “Londonistan”. It also spawned extremist groups such as al–Muhajiroun, run by Bakri Mohammed and later Anjem Choudhry.

Raffaello Pantucci, a senior research fellow at the Rusi think tank and an expert on extremism, said the latest cases highlighted the role Britain plays as a centre for Islamist jihad. “The UK has always been a hub for these connections, not just in the US but across Europe,” he said. “It is an extension of the days of Londonistan and is just less overt than it was.

“The residual communities created by al–Muhajiroun still exist or there are offshoots. It used to be that people would come to the UK but now it seems that the issue is being exported as well.”

In Iraq, a Briton is understood to have died in heavy fighting for the town of Jalawla on Wednesday, along with dozens of other fighters, said Rooz Bahjat, a senior security official. The man had blue eyes and was of Mediterranean appearance. He wore a long beard in the style associated with the radical Salafi version of Sunni Islam, without a moustache.

Mr Bahjat said Kurdish fighters, some of whom were brought up in exile in Britain, recognised a British accent among the voices of the foreign fighters.

“We very strongly believed this guy was British,” Mr Bahjat said. Items were recovered from him “that could only have come from Britain”.

He said full details were being passed to the Government to help them with identification and informing relations.

The Muslim Council of Britain last night said it was concerned by reports of young Britons going to the Middle East. “But travelling to Iraq or Syria will not help the people of those countries, and will cause anguish for worried parents at home,” it said in a statement.

The Isis video was taken down by YouTube last night. A Home Office spokesman said: “We do not tolerate the existence of online terrorist and extremist propaganda, which directly influences people who are vulnerable to radicalisation.”