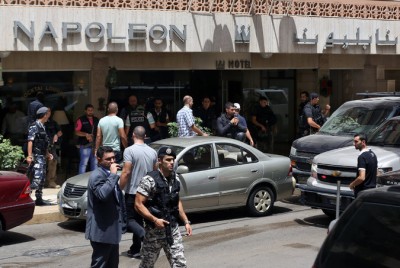 BEIRUT, Lebanon  — Lebanese security forces detained 12 men in a Beirut hotel on Friday, in what local news media reported was a move to capture members of the Sunni militant group ISIS who were suspected of plotting to assassinate a leading Shiite political figure.

Security forces blocked off numerous streets in Hamra, the main commercial district of West Beirut, and surrounded the Napoleon Hotel. Outside the hotel, in a neighborhood of narrow streets full of shops, apartments and midrange hotels, dozens of armed security officers forced pedestrians off the streets, then led 12 men, their heads covered, out of the hotel.

According to Lebanese news channels, security forces were still hunting down other militants believed to be at large in the Hamra neighborhood. The channels said that the militant cell comprised mostly foreigners, including Syrians, Iraqis, Pakistanis and others, and that as many as 17 men had been arrested or were being sought.

Amal is an ally of Hezbollah, the Lebanese Shiite party and militant group that has provided decisive military help to President Bashar al-Assad of Syria against insurgents, including Sunni jihadist groups.

As the events unfolded in Beirut, there were reports of a suicide car bombing at a Lebanese Army checkpoint on the main Beirut-Damascus highway in Lebanon’s eastern Bekaa Valley. Lebanon’s Interior Ministry announced that two members of the security forces were killed and at least six were among the many wounded in the bombing.

The authorities said they were investigating whether the Bekaa car bomb had been an attempt to target General Ibrahim.

Inside Syria, a car bomb in a village near the city of Hama killed more than 30 and wounded more than 50, according to Syria’s state news agency. The agency blamed the attack on anti-Assad rebels.