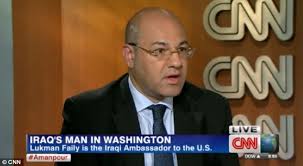 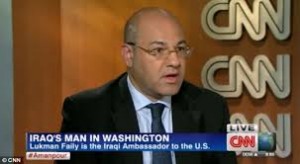 In appealing for more American help in fighting off Sunni Islamic extremists, the Iraqi Ambassador to the U.S. warned of a dire threat to the entire globe.

“What you have in Afghanistan, with one bin Laden – you will have a thousand of them,” Ambassador Lukman Faily told CNN’s Christiane Amanpour on Monday.

“That’s the situation in Iraq.”

The Obama Administration is scrambling to stave off the unthinkable: The end of Iraq as we know it, partitioned along sectarian lines with a rump al-Qaeda-like statelet in control of vast parts of the country, as well as Syria.

ISIS, the Islamic State of Iraq and Syria, has seized yet another city, Tal Afar, in the country’s northwest.

The militants have their sights set on Baquba, a mere 60 kilometers from the country’s capital.

“Baghdad would be [the crown jewel] for them,” Faily said, “but we will not let that happen.” 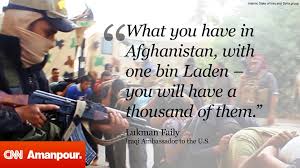 The American government continues to weigh its option for responding to the crisis, even direct talks with Shiite Iran, but President Obama has ruled out sending in American troops. The U.S. military is, however, bolstering its presence in the Persian Gulf.

“What we are saying is we cannot wait until tomorrow. A decision has to be made; it should have been made yesterday,” Faily said.

“We have been saying that we need to strengthen our army with having fighter planes, apache helicopters, and others.”

“The Administration now understands that urgency.”

“We are welcoming discussions,” he said, “but we have to be clear the immediate threat would not allow for a long discussion.”

Prime Minister Nouri al-Maliki, a Shiite, has come under criticism for being ethnically divisive and not running an inclusive government.

Former Iraqi Prime Minister Ayad Allawi told Amanpour last Thursday that a new government should be formed, of which Maliki could be a member but not a leader.

“These are all nice to have discussions. What we have now in Iraq is an immediate threat.”

“We already have a national unity government. We’ve had it for some time. That’s not the issue.”