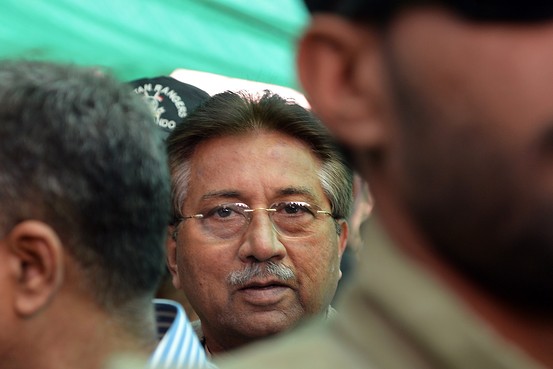 Former Pakistani president Pervez Musharraf is escorted by soldiers as he arrives at court in Islamabad in April. Agence France-Presse/Getty Images
Share:

The government of Pakistan appealed a court ruling that would allow former military ruler Pervez Musharraf to leave the country, a move likely to further fuel tensions between civilian authorities and the powerful army.

The fate of Mr. Musharraf, who ruled Pakistan between 1999 and 2008 and who now faces treason charges, is a major source of conflict between the government of Prime Minister Nawaz Sharif and the military. The military doesn’t want to see its former army chief dragged through the courts any further; in particular, security officials say, it doesn’t want to see a precedent set in which a former army chief is convicted of treason.

The new strains come as Pakistan considers launching a long-awaited operation against Taliban militants in the country’s tribal areas, an offensive that would require close coordination between the government and the armed forces.

Mr. Musharraf, who is free on bail while the treason charge and other cases are heard, had asked for court permission to travel abroad. The request was granted Thursday by the High Court of Sindh province. However, that order gave the government 15 days to challenge the ruling in the Supreme Court, an appeal that was filed Saturday.

“The Respondent [Musharraf] has all the reasons not to come back to Pakistan once he leaves Pakistan and his trial, which is at an advanced stage, would simply be brought to a standstill,” said the Pakistani government’s court filing.

A specially constituted court has been hearing the treason case against Mr. Musharraf since December 2013. That court has said it doesn’t oppose him traveling abroad.

Mr. Musharraf in 1999 overthrew the then-government of Nawaz Sharif, who is now back as prime minister, following elections in May 2013.

Faisal Chaudhry, one of Mr. Musharraf’s lawyers, said the defense team would contest the government’s appeal. “This is a political appeal,” said Mr. Chaudhry. “This just shows the Prime Minister’s vindictiveness.”

Mr. Musharraf said he wanted to go to Dubai to visit his ailing mother and would return to Pakistan when required to appear in court. He says he isn’t guilty of any charges.

Pakistani courts and parliament have legally sanctified Mr. Musharraf’s takeover of 1999. The treason case against him stems from his so-called “second coup,” a November 2007 decision to sack senior judges who had increasingly challenged his rule.

Mr. Musharraf also faces separate charges related to the killing of former prime minister Benazir Bhutto in 2007, the death of rebel tribal leader Abkbar Bugti in 2006, and the 2007 operation against Islamist radicals in the Red Mosque in Islamabad.

Prime Minister Sharif’s government has said that it is proceeding under the constitution and that all citizens should be equal under the law.

“The military is an institution in this country. An elected government is not subordinate to any institution, whether it is the army or the police or whatever,” said Zafar Ali Shah, a senior member of the ruling Pakistan Muslim League-Nawaz. “Musharraf is just a retired general, just like hundreds of other retired generals.”

Mr. Musharraf went into exile in 2008, after democracy was restored, but he returned to Pakistan last year, hoping to contest the 2013 elections. Instead, he found himself embroiled in multiple court cases and barred from politics.

In March this year, Mr. Musharraf was charged with treason. The military thought it had reached an understanding with the government that Mr. Musharraf would be allowed to go abroad after the treason indictment, according to security officials, and now believes the deal was reneged on. The government insists that there was no such agreement.

Military officials say that there are strong feelings about the treatment of Mr. Musharraf within the ranks. In April, army chief Gen. Raheel Sharif, in a statement related to the Musharraf case, warned that the army “will resolutely preserve its own dignity and institutional pride.”

Gen. Raheel Sharif was handpicked for the job last November by the prime minister, who isn’t related. But already the relationship between the general and Prime Minister Sharif has been under strain. Aside from the Musharraf issue, there are behind-the-scenes differences over the government’s handling of peace talks with the Pakistani Taliban and a television channel, Geo News, which the military has sought to shut down.

Public anger is mounting over inflation, electricity blackouts and terrorism, noted Hasan Askari Rizvi, an analyst based in Lahore. “If the performance of the government had been fine, they could have got away with this” prosecution of Mr. Musharraf. Mr. Rizvi said. “The military can easily destabilize the government.”

While the military isn’t expected to stage a coup, Mr. Rizvi said, it can employ other tactics, including encouraging political opposition.