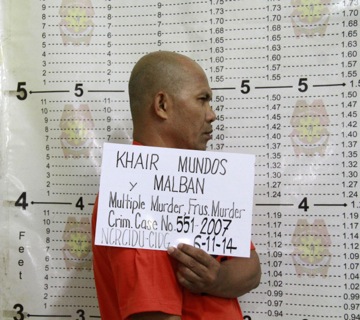 In this photo released by the Philippine National Police Public Information Office (PNP-PIO) in Manila, Philippines, Khair Mundos, a top commander of the Abu Sayyaf extremist group who is on the U.S. list of most-wanted terrorists and has acknowledged receiving al-Qaida funds to finance bombings in the country, undergoes a police booking procedure following his capture near Manila’s international airport Wednesday, June 11, 2014. Philippine security officials said Mundos was arrested in a slum community near Manila’s international airport but it was not immediately clear why he was in the capital. The military and police have been hunting him for his alleged involvement in bombings and kidnappings. (AP Photo/Philippine National Police Public Information Office)
Share:

One of the U.S.’s most wanted terrorists, Khair Mundos, was brought into custody by Philippine authorities on Wednesday morning, after he was arrested in a slum near the capital’s international airport.

Mundos is a key figure in the Philippines-based terrorist group Abu Sayyaf, believed to have been responsible for a spate of lethal attacks on U.S. troops and Filipinos since forming near the city of Zamboanga in the early 1990s. His capture brings an end to a seven-year manhunt.

After fleeing prison in February 2007, Mundos worked as a “fundraiser, bomb maker, and instructor” for Abu Sayyaf. One of his roles was arranging receipt funds for his group from al-Qaeda.

“Mundos confessed to having arranged the transfer of funds from al-Qaeda to Abu Sayyaf group leader Khadaffy Janjalani to be used in bombings and other criminal acts throughout the [Philippine] island of Mindanao,” said a U.S. State Department statement.

In 2009, the State Department offered half a million dollars for information leading to his arrest. Mundos also became the Philippine government’s most sought-after terrorist, and was accused of having ties to the leader of the region’s most feared militant group, Jemaah Islamiyah, according to a U.S. State Department cable released by WikiLeaks. 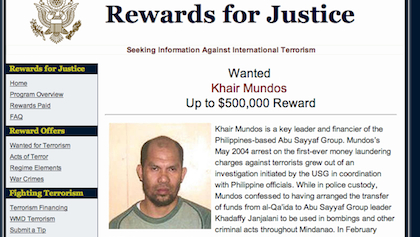