Jumblatt to tell Hariri : I won’t vote for either Aoun or Geagea 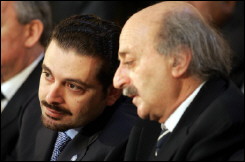 According to local reports preparations are already underway to arrange for the meeting between Hariri and Jumblatt to be held soon in Paris, France.

While no date has reportedly been set for the Paris meeting, Health Minister Wael Abu Faour a key member of Jumblatt’s parliamentary bloc said recently that there was nothing that could prevent the two leaders from meeting, given the political relationship and personal friendship between them.

Jumblatt made it clear during the interview that he will not pull out his candidate (Henri Helou) of the presidential race even if an agreement was reached between Hariri and Aoun.

Jumblatt told Al-Arabiya that he hopes that the coming president would follow in the footsteps of former President Michel Suleiman, who he said established the foundation of the state in the Baabda Declaration, seen as the former president’s most renowned achievement.

The declaration, signed by rival groups in 2012 during a Dialogue session chaired by Suleiman, stipulates that Lebanon should distance itself from regional turmoil, especially the crisis in Syria.

Yesterday the Lebanese parliament failed for the sixth time in a row to hold a session to elect the country’s new president to replace Suleiman whose terms ended on May 25.

After Geagea secured 48 votes last April 23, the Hezbollah led March 8 alliance including Aoun and Franjieh walked out from the parliament to make sure there was no quorum to elect a president. They continued their boycott of the parliament during the 5 other sessions that followed .

Addressing the crisis in Syria, Jumblatt, a staunch critic of President Bashar Assad, said the Syrian regime was only capable of assassinating.”

“In Syria, there was a state and Bashar Assad turned it into a mob governing the people,” the Druze leader said and added “It is a disgrace for Syrian Druze to support someone who is killing his own people.”