Assad throws his support behind Aoun for Lebanon presidency 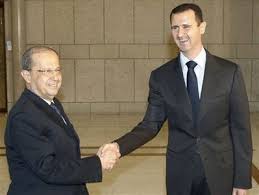 Syrian President Bashar Assad threw his support behind the candidacy of Free Patriotic Movement leader Michel Aoun describing him as an “honest man,” and saying he would welcome his election as the next Lebanese president.

In an interview with al-Akhbar daily published on Wednesday, Assad stressed that his country does not interfere in the local affairs of any Arab state but nevertheless he added: “Aoun is an honorable and honest man who fought with dignity and reconciled with dignity and remained loyal to his stance towards us despite all the storms.”

On the eve of the presidential elections in Syria , Aoun was quoted by Al Joumhouria newspaper as saying that Assad deserves a Nobel prize for combating terrorism.

He added that he supports Assad “because he opposes his alternative.”

The Syrian regime usually refers to the mostly Sunni rebels who ware trying to topple the 40 year old Assad dictatorship as terrorists.

On Monday the Lebanese parliament failed for the sixth time in a row to hold a session to elect the country’s new president to replace Michel Suleiman whose terms ended on May 25.

After Lebanese Forces leader Samir Geagea secured 48 votes last April 23, the Hezbollah led March 8 alliance including Aoun and Marada Movement leader Suleiman Franjieh walked out from the parliament to make sure there was no quorum to elect a president. They continued their boycott of the parliament during the 5 other sessions that followed .