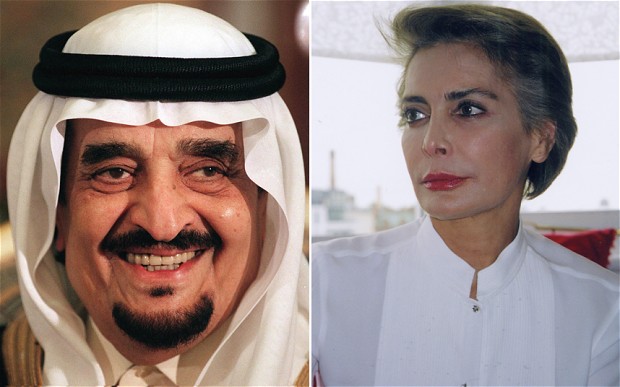 Janan Harb claims she was secretly married to King Fahd when he was prince
Share:

A British woman who claims she was secretly married to King Fahd of Saudi Arabia has won a key victory in a multi-million pound legal battle as the High Court rejected a “state immunity” claim by the late monarch’s son.

Janan Harb, 65, told the High Court in London that she wed King Fahd when he was a prince and an interior minister in 1968, but that she was forced to leave the country several years later, before he ascended to the throne.

She claims she is owed a lump sum of £12 million ( $20.15  million)  which was promised to her 11 years ago, plus the ownership of two high-value apartments in central London.

Lawyers for Prince Abdul Aziz, the king’s son, argued he had “state immunity” and the court had no jurisdiction to try Mrs Harb’s claim.

But Mrs Justice Rose threw out the prince’s argument, opening the way for a full hearing which risks embarrassing the House of Saud by exposing details of life inside what Mrs Harb has previously described as a royal harem, as well as new claims about their business dealings.

After the ruling, Mrs Harb said she was “very happy and relieved”.

The High Court heard Mrs Harb’s claim that King Fahd, who ruled Saudi Arabia from 1982 until his death in 2005, had promised to provide for her financially for the rest of her life.

Mrs Harb said Prince Abdul Aziz had told her that he was prepared to honour the terms of his father’s promise and had offered to pay a lump sum of£12 million ( $20.15  million) and to transfer to her the title of the two flats in Cheyne Walk, Chelsea – one of London’s most exclusive addresses.

Mrs Harb said she had brought legal action because she had not received the money or the properties.

Mrs Justice Rose said the prince, who did not attend court, had made no response “as regards the accuracy or otherwise” of Mrs Harb’s allegations and his submissions had been “limited to contesting the jurisdiction of the court”.

The judge said there was no evidence of a similar claim ever being brought in the past.

But the judge ruled the king and the prince would have been able to claim “sovereign immunity” if Mrs Harb’s claim had been brought when the monarch was alive.

A spokesman for law firm Neumans, which represented Mrs Harb, said later: “Mrs Harb is passionate about sharing her personal account of what it is truly like to be married to a Saudi king and believes the exposure will be of public interest.

“Her story has received international interest from film producers and she is currently in detailed discussions to progress the adaptation of her book into a film. There are also negotiations under way with regard to the publishing of her book in advance of this.”

Mrs Harb’s solicitor, Mandeep Kaur Virdee, added: “We are delighted with the outcome of this judgment. The law surrounding this area has already established, confirming that personal immunity ceases when a head of state is no longer in office for any reason.

“The prince’s application sought to extend the personal immunity privilege by suggesting that if a sovereign dies whilst still an acting monarch, the deceased and their agents could continue to enjoy the privilege of personal immunity.

“This judgment confirms that once a sovereign is out of office for whatever reason, including death, personal immunity does not survive.”

Mrs Harb was born in poverty in Palestine but is now a British citizen. She claims she married King Fahd when she was 19 and was part of his harem. She has also claimed she was not allowed outside the palace walls and prohibited from having children.