The decision by Lebanon’s militant Hezbollah group to join the civil war in neighboring Syria and fight along President Bashar Assad’s forces was a historic and moral “mistake” toward the Syrian people, a leading Lebanese politician has said.

The harsh criticism by Walid Jumblatt, who leads Lebanon’s minority Druse sect, reflects his increasing pessimism about the bloody conflict next door, now in its fourth year.

Although he leads a minority sect, Jumblatt is a pillar and a mainstay in Lebanese politics and is often referred to as the country’s “kingmaker” because of his small bloc’s track record of tipping the balance during key votes in parliament.

“Hezbollah intervened in Syria and did not care about the Lebanese (public) opinion,” Jumblatt told The Associated Press during a recent interview at his home in Beirut. “This is a historical and moral mistake toward the Syrian people.”

Hezbollah’s fighters openly entered the fight in Syria in May 2013 and were instrumental in helping Assad’s troops push back rebels and re-capture strategic towns and rebel strongholds along the border with Lebanon and near Syria’s capital, Damascus.

This turned the tide in the conflict, giving Assad’s forces the upper hand against the rebels seeking to overthrow the Syrian leader, who last week won a third seven-year term in a presidential election derided as a farce by the opposition.

Now, the Syrian civil war will be “very long,” Jumblatt said. Instead of fighting in Syria, he said Hezbollah should have focused on archenemy Israel.

“I say that the guns should be directed toward the Israeli enemy,” Jumblatt added.

Jumblatt – whose Druse are like Assad’s Alawites, an offshoot of Shiite Islam – has been known for his shifting loyalties. His history with Hezbollah has been both complex and full of U-turns.

After the 2005 assassination of former Lebanese Prime Minister Rafik Hariri, Jumblatt sharply criticized Hezbollah and the Syrian government, which many in Lebanon blamed for the killing. Damascus denies it was behind Hariri’s slaying.

In May 2008, tensions between Jumblatt’s Druse followers and allies on one side and Hezbollah on the other erupted into street fighting in Beirut and nearby mountains, killing 81 people and nearly plunging Lebanon into another civil war.

In 2009, Jumblatt reconciled with the Hezbollah leader, Sheik Hassan Nasrallah, who the following year personally mediated a meeting between the Druse politician and Assad. That meeting was a sharp turn for Jumblatt, who only three years earlier had called the Syrian president a “snake” and a “tyrant.”

Then, after his last visit to Damascus in June 2011, Jumblatt again broke with Assad.

“We are still at the beginning of the war in Syria. In the long term, the map of the Middle East will be redrawn,” Jumblatt told the AP.

“The main winner is the Islamic Republic,” he said referring to Iran, which is one of Assad’s strongest allies.

The Syrian conflict, which has so far killed more than 160,000 people, a third of whom were civilians, has sharply divided the Lebanese, and violence has often spilled into the tiny Arab country, killing and wounding hundreds here.

Many Lebanese Shiites back Assad, while Lebanon’s Sunnis back the mostly Sunni rebels fighting to overthrow him. Jumblatt has repeatedly urged his countrymen not to get involved in the Syrian conflict.

But from the topic of war, the Druse politician is quick to turn to lighter subjects when prompted. 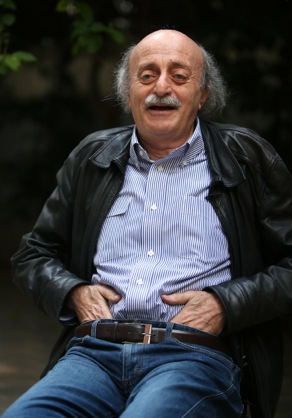 Asked about actor George Clooney’s engagement to 36-year-old Lebanese-British international law attorney Amal Alamuddin – who like Jumblatt happens to be a Druse – he smiled and said he hoped the couple would soon visit the Druse heartland.

Jumblatt said he would be happy to welcome Clooney in his palatial mansion in the Druse village of Mukhtara, high in the mountains over Beirut.

Clooney will bring us “great publicity,” Jumblatt said. “He can make a movie about the Druse sect.”