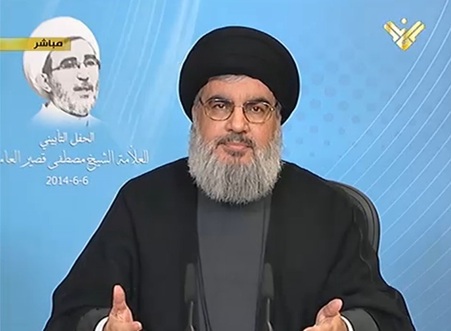 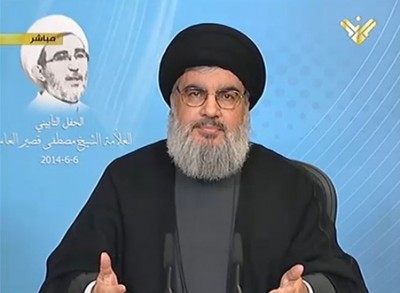 Hezbollah chief Hassan Nasrallah made another TV appearance via video link on Friday to commemorate the late Shiite scholar Sheikh Mustafa Kassir al-Ameli, whom he credited with the victory against the Syrian rebels .

“The resistance would not have been able to defeat the plot against Syria had it not been for this popular, scholar .” He said

Nasrallah said that he intended to talk about 3 issues during his Friday speech:
This specific commemoration , the Lebanese affairs and the Syrian affairs.

Addressing the pressing and controversial issue of wages and ranks he blamed the politicians for not doing their job.

“Politicians are ethically, humanly, and nationally responsible for resolving the ranks and wages system issue soon and saving the official exams and the academic year.” He said without hinting that the country is broke and may not be able to afford any wage increases as long as the economy is not growing and the budget deficit continues to rise.

“Foreign countries do not have time for us, and have repeatedly said that they will not intervene, so why are you still waiting for them?”


This is a possible response to Maronite patriarch Bechara Boutros Rai who accused Hezbollah of seeking a third share in power in Lebanon. Currently half the parliament is made up of various Christian sects while the other half is made up of various Muslim sects ( equal share for the Shiites and Sunnis and minority share for the Druze and Alawites) . According to Rai Hezbollah wants to change the formula so that it has one third share in the parliament.

Nasrallah called for more dialogue between Future Movement and FPM to resolve the presidency issue.

Nasrallah then addressed the situation in Syria and started out by praising the elections.

“The Syrian presidential election is an achievement. The US and the West did everything to prevent the Syrian elections. All those who refused the elections and condemned them, pressured the Syrian people both in Syria and abroad.” He said..

The United States Labeled the elections as ” a big Zero ” and ‘disgrace’. Even Syrian president Bashar al Assad’s ally Russia admitted that the elections were not 100% democratic. The only observers to monitor the elections were countries that are friendly to the Syrian regime such as Russia, China, Iran , Cube and Venezuela .

Nasrallah denied that Hezbollah pressure the Syrian to vote for Assad.

“Hezbollah did not pressure the Syrians in Lebanon to vote. They went of their own volition. This was an election of millions. These elections proved the unity of Syria, the persistence of the state… and the Syrians’ will to resist and decide their own fate.”

According to media reports Hezbollah bussed the Syrians in Lebanon to vote at the Syrian embassy in Yerze, a suburb of Beirut and then bussed them again to Damascus to vote for another time. Several Syrians openly admitted voting twice in the presidential election.