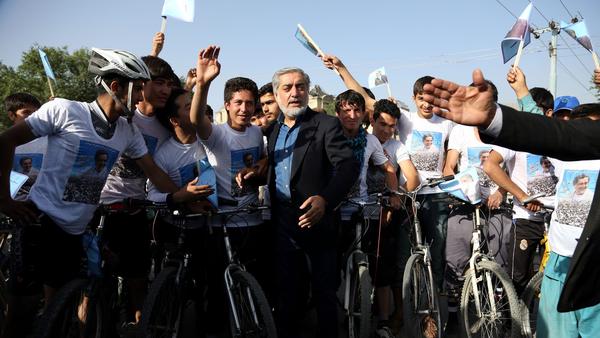 Afghan presidential candidate Abdullah Abdullah talks with supporters at a cycling event in Kabul shortly before two blasts struck his convoy. (Rahmat Gul / Associated Press)
Share:
Afghanistan’s presidential front-runner, Abdullah Abdullah, escaped an assassination attempt Friday when twin bombs exploded as his motorcade was traveling through Kabul. At least six people were killed, including one of Abdullah’s bodyguards, and 17 others injured, officials said.

The country’s deadliest attack targeting a presidential campaign since the race kicked off in February underscored deepening unease over security in Afghanistan ahead of a scheduled June 14 runoff vote, which Taliban insurgents have vowed to disrupt.

It was also the first major attack since the Taliban and the Obama administration agreed to a deal that freed a captive American prisoner of war in exchange for five Taliban officials held at the U.S. detention facility at Guantanamo Bay, Cuba. The prisoner swap briefly raised hopes for future peace talks to end the Taliban’s long-running insurgency, but deadly violence has continued.

No group immediately claimed responsibility for Friday’s twin blasts, which occurred around noon local time in southern Kabul as Abdullah and his team were leaving a campaign event at a hotel.

A traffic cop and several civilians were among the dead, officials said.

Abdullah, a former Afghan foreign minister, appeared on television an hour after the blasts. He said he and his two vice-presidential candidates were unharmed, and he condemned “those who are killing the innocent people of Afghanistan.”