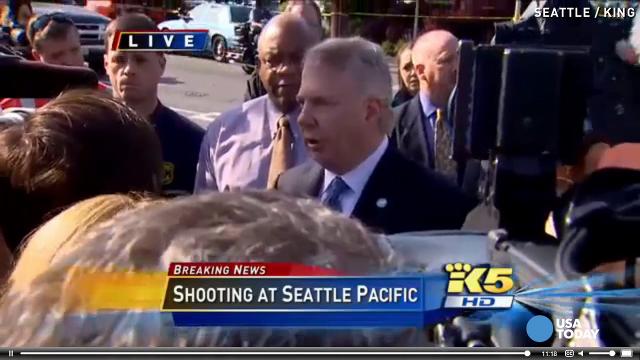 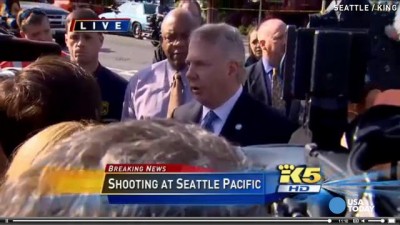 When a lone gunman armed with a shotgun at a small Seattle university stopped firing at students to reload, another student pepper-sprayed him and subdued him with the help of others and prevented more deaths, police said.

‘‘There are a number of heroes in this,’’ Assistant Police Chief Paul McDonagh said. ‘‘The people around (the gunman) stepped up.’’

A 19-year-old man was fatally shot and two other young people were wounded after the gunman entered the foyer at Otto Miller Hall on the Seattle Pacific University campus and started shooting Thursday afternoon. When he paused to reload, a student building monitor disarmed him. The gunman had additional rounds and a knife, McDonagh said.

‘‘But for the great response by the people of Seattle Pacific, this incident might have been much more tragic,’’ he said.

The man in custody was not a student at the school, McDonagh told a news conference.

Four people, including the young man who died, were taken to Harborview Medical Center. A critically wounded 20-year-old woman remained in intensive care Friday, according to the hospital. A 24-year-old man was in satisfactory condition. A 22-year-old man injured in the struggled with the suspect was treated and released, officials said.

None of the victims was immediately identified.

Aaron R. Ybarra, 26, was booked into the King County Jail late Thursday for investigation of homicide, according to police and the jail roster.

Also late Thursday, police who said they were serving a warrant entered a house believed tied to Ybarra. A phone message left at that house in the north Seattle suburb of Mountlake Terrace was not immediately returned.

Messages left with friends and relatives of Ybarra via social media were not immediately returned.

The Seattle Times reported that the suspect’s father, Ambrose Ybarra, said he did not know anything about the shooting.

‘‘We just hope he’s safe,’’ he told the newspaper. ‘‘It’s upsetting to have these accusations thrown around. We’re in emergency mode. We are trying to stay calm.’’

The paper said Zack McKinley described himself as one of Ybarra’s closest friends and said he was ‘‘super happy and friendly.’’

McKinley said the attack was puzzling because Ybarra was happy to have just started a job bagging groceries at a store. Ybarra could get emotionally low, but McKinley said he had a good group of friends and never saw him depressed.

Student Chris Howard was at Otto Miller Hall when the shooting happened. He said he saw the wounded woman on the floor. Her phone was covered in blood, but she asked those helping her to look through her phone for her mother, aunt and best friend.

Howard said he also saw the suspect pinned on the floor.

‘‘The suspect was calm. Not speaking. Not moving. Not struggling. Just there,’’ Howard said.

The shooting came a week before the end of the school year.

McDonagh said detectives are working as quickly as they can to figure out the gunman’s motive or intended target. He said it appears the suspect acted alone.

The university locked down its campus for several hours. Some students were taking finals in the building that the shooter entered.

On Thursday evening, an overflow crowd packed the First Free Methodist Church on campus for a service of prayers and song. The private Christian university cancelled classes Friday and planned to hold a service of ‘‘prayer, lament and worship’’ at noon.

‘‘We’re a community that relies on Jesus Christ for strength, and we’ll need that at this point in time,’’ said Daniel Martin, university president.

The school’s 40-acre campus is in a leafy residential neighborhood about 10 minutes from downtown Seattle.

Jillian Smith was taking a math test on the second floor of Otto Miller Hall when a lockdown was ordered.

She heard police yelling and banging on doors in the hallway. The professor locked the classroom door the students lined up at the front of the classroom.

Smith said she saw bullet casings and what appeared to be blood on the lobby carpet and splatter on the wall as she left the building.

‘‘Seeing blood made it real,’’ Smith said. ‘‘I didn’t think something like this would happen at our school.’’

The gun violence follows a spate of recent shootings on or near college campuses.

Last month, Elliot Rodger killed six people and injured seven before turning his gun on himself in a rampage in Isla Vista, California, near two universities, according to police.

Seattle Mayor Ed Murray, noting previous mass shootings in the city, said: ‘‘Once again the epidemic of gun violence has come to Seattle.’’