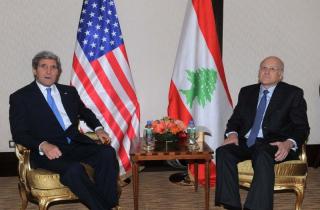 US Secretary of State John Kerry has rejected Israeli criticism of his recognition of the new Palestinian government formed by Fatah and Hamas.

Israel’s Prime Minister Benjamin Netanyahu said on Tuesday that he was “deeply troubled” by the decision.

But during a visit to Lebanon, Mr Kerry noted the ministers were independent technocrats and insisted that they would be watched “very closely”.

The Islamist movement is considered a terrorist group by Israel and the US.

After swearing in the unity government on Monday, Mr Abbas stressed that no ministers were affiliated to Hamas.

Prime Minister Rami Hamdallah said his cabinet was committed to all previous agreements with Israel and would continue “programmes of peace” aimed at establishing an independent Palestinian state.

‘Betrayed’
Such assertions were rejected by Mr Netanyahu, who urged Washington to “make it absolutely clear to the Palestinian president that his pact with Hamas, a terrorist organisation that seeks Israel’s liquidation, is simply unacceptable”.

“I’m deeply troubled by the announcement that the United States will work with the Palestinian government backed by Hamas,” he told the Associated Press.

At a news conference in Beirut, Mr Kerry played down the dispute and stressed that US officials would work with the new cabinet only “as we need to, as is appropriate”.

“We are going to be watching it very closely, as we have said from day one, to make absolutely ensure that it upholds each of those things that it has talked about, that it doesn’t cross the line.”

Both the UN and EU have welcomed the new government, on the basis of the assurances that it will abide by its commitments of recognition of Israel, non-violence and adherence to previous agreements.

“The process of Palestinian reconciliation faces many challenges but it also creates new opportunities for the peace process, for democratic renewal and for the Palestinian people in both Gaza and the West Bank,” EU foreign policy chief Catherine Ashton said on Tuesday.

‘Reuniting institutions’
Hamas, which won parliamentary elections in 2006, ousted forces loyal to Mr Abbas in Gaza during clashes in 2007 and set up a rival government.

Numerous reconciliation attempts have failed, but efforts were stepped up after US-brokered direct peace talks with Israel collapsed in April.
Mr Hamdallah has said the cabinet is focusing on “how to reunite the institutions in the West Bank and Gaza”.

It is not clear how the dual civil services will be merged and whether Hamas will cede any control of security in Gaza, where in addition to its 25,000-strong military wing, the Izz al-Din al-Qassam Brigades, the group controls 20,000 other armed personnel.

While in Lebanon, Mr Kerry also said Tuesday’s presidential election in areas of Syria controlled by the government was “meaningless”.

He said millions were not able to vote and the ballot changed nothing.

Mr Kerry called the humanitarian situation in Syria one of the worst catastrophes, and announced an extra $290m (£173m) in aid for UN agencies looking after the 1.1 million refugees in Lebanon.