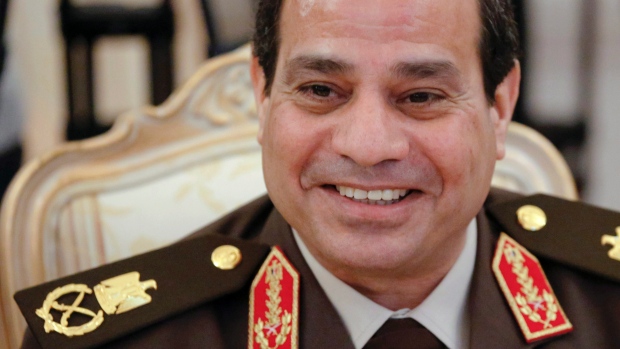 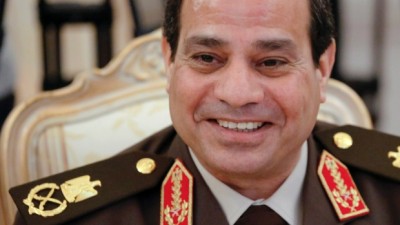 The Election Commission announced the results of last week’s election, saying el-Sissi won a landslide victory with 96.9 per cent of the vote, with turnout of 47.45 per cent. El-Sissi garnered 23.78 million votes, while his sole rival, leftist politician Hamdeen Sabahi, got 318,000 — lower than the 1.4 million invalid ballots cast in the polling.

El-Sissi’s victory was never in doubt, but the career infantry officer had pushed for a massive turnout as well to bestow legitimacy on his ouster last July of Islamist President Mohammed Morsi and the ensuing crackdown on his Muslim Brotherhood and Islamist supporters.

Saudi Arabia’s King Abdullah, a major backer of el-Sissi and a relentless opponent of the Brotherhood, quickly congratulated him and said his victory would mean an end to the turmoil of the past three years since the ouster of autocrat Hosni Mubarak in a 2011 popular uprising.

“This is a historic day,” the king said in a letter on the Saudi state news agency. “the brotherly egyptian people has suffered in the past period of chaos. Some of those short sighted called it the creative chaos.” He called for donors conference to help Egypt “get out of the tunnel,” referring to its wrecked economy.

El-Sissi’s vows of stability drew him widespread support — fanned by months of fervent nationalist rhetoric praising him in almost all Egyptian media. The retired military chief removed Morsi on July 3 after massive protests by the president against the Islamist president and his Muslim Brotherhood, and since then, media have depicted el-Sissi as the nation’s saviour.

Critics, however, fear the career military man will bring back aspects of Mubarak’s authoritarian rule. Since Morsi’s ouster, new laws have clamped down on protests, and during his campaign el-Sissi showed little tolerance for dissent that might disrupt his drive to impose stability. On Monday, the Interior Ministry announced plans to increase surveillance of the internet for a variety of “dangers” — ranging from extremism to “humiliating mockery” of officials.

El-Sissi’s victory was dented by the extraordinary means used by the military-backed government to drum up a large turnout for the election. After signs that the turnout on the first of two scheduled days of voting on Monday was a lowly 15 per cent, the government declared the next day a national holiday to free people to go to polls. The election commission threatened to slap fines of $70 — a hefty sum for most Egyptians — on those who did not vote.

When Tuesday polling still seemed low, the commission abruptly extended the election to a third day. The state made bus and train travel free to allow migrants to return to home districts to vote. Throughout the day, TV networks berated Egyptians as “ungrateful” and “traitors” for not voting.

El-Sissi has said it will take 25 years to bring a real democracy to Egypt and has spoken out against too many freedoms that cause turmoil, amid an already shrinking space for political activity. That has raised many Egyptians’ fears that his presidency will bring an increased clampdown on dissent and a return of police power.

In the latest sign, Egypt’s most popular satirist Bassem Youssef announced Monday the cancellation of his landmark weekly TV show, Egypt’s answer to Jon Stewart’s “The Daily Show,” which lambasted presidents and politicians. He blamed pressure on the station airing it and a climate in the country that no longer accepts satire.

In more alarming step, the Interior Ministry, in charge of police, announced plans to set a new surveillance system over the internet to monitor social networking sites for a wide range of forms of dissent, as well as for extremist activity. On Monday, Interior Minister Mohammed Ibrahim announced the plans, insisting they did not aim to infringe on freedom of expression.

But an Interior Ministry document on the plans published by the pro-military newspaper Al-Watan listed a wide variety of perceived threats on social media, which the document said is used to express “contempt for religion,” “spread rumours and tarnish facts with bad intentions,” “humiliate through mockery”, ” and encourage “extremism, violence, rebellion, rallying for demonstrations, sit-ins and illegal strikes.”

“In light of such grave and dangerous security challenges,” the document said, “the ministry decided to set up a system to spot security dangers on social media through expansive search process.” The document said the ministry had asked companies to present bids to set up the monitoring system.

Social media were one of the main vehicles for engineering the 2011 uprising that led to Mubarak’s fall and the collapse of its police apparatus.

Hazem Abdel-Azem, a former IT official and now a member of el-Sissi’s presidential campaign, told the private CBC TV network that previously the ministry monitored the internet “manually” and that now it is looking for “a new system.”

The announcement raised a storm of outrage on Egyptian social media sites. Some activists, however, said the plans may aim more to intimidate, since monitoring software is widely available on line.

“I think the report was only meant to create panic among users of social media,” said Hossam el-Hamalawy, an activist in the Revolutionary Socialists, in a comment on his Facebook page.