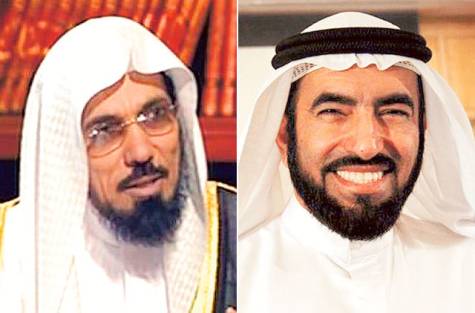 Salman Al Odah (L) and Tariq Al Suwaidan
Share:
Saudi authorities have banned the sale of books by two Islamist authors known to be sympathetic to the Muslim Brotherhood, the London-based daily al-Hayat reported on Monday.

The Saudi-owned paper said it has confirmed information that books authored by Saudi cleric Salman al-Odah and his Kuwaiti counterpart Tariq al-Suwaidan were ordered to be removed from the bookstores.

Hussein al-Ghamdi, manager of a bookstore in Jeddah, told al-Hayat that he received orders from the Saudi religious police to remove the books of Odah and Suwaidan from the shelves “immediately.”

Ghamdi said he complied with the order, which he said could be reversed in the future.

He cited an example when religious police asked him to remove a book for containing “satanic and erroneous information,” but discovered later there was nothing wrong with the book and ordered its return. “Sometimes the ban could be wrong,” he said.

He described Odah and Suwaidan’s books as “popular.”

Both Odah and Suwaidan are popular especially in the Gulf region. On Twitter, Odah has more than 4.7 million followers while Suwaidan has almost 3 million.

Suwaidan was sacked from the Islamic TV station al-Resala last August after admitting that he belonged to the Muslim Brotherhood.

Resala is owned by the Saudi billionaire Prince al-Waleed Bin Talal of Saudi Arabia, who said his TV station has no place for Muslim Brotherhood members.