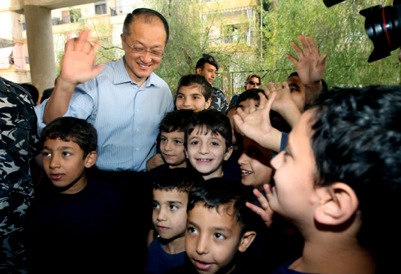 World Bank President Jim Yong Kim, left, waves as he stands next to Syrian refugee students, at a Lebanese public school, in Burj Hammoud area, east Beirut, Lebanon, Tuesday, June 3, 2014. Kim is on an official visit to Lebanon aimed at supporting the tiny Arab country which is hosting over a million Syrian refugees. (Hussein Malla/Associated Press)
Share:
The president of the World Bank warned Tuesday that Lebanon is reaching “breaking point” in terms of its ability to deal with the massive influx of Syrian refugees.

Speaking in an interview Tuesday with The Associated Press after visiting with Syrian refugee students at a public school east of Beirut, Jim Yong Kim urged international donors to increase their financial support to the tiny Arab country.

Lebanon, home to 4.5 million people, is struggling to cope with the presence of more than 1 million refugees in desperate need of housing, education and medical care.

Lebanon has begun efforts to curb the flow of refugees. Social Affairs Minister Rashid Derbas told reporters Monday that Lebanon will no longer accept Syrians as refugees if they come from safe areas or regions far from the Lebanese border.

Derbas said the government has started efforts to set up refugee camps inside Syria or in the no man’s land between the two countries.

Standing before the faded concrete exterior of a school in Burj Hammoud district, Kim said: “There are so many Syrian students coming in that this school is just literally breaking down because of trying to absorb all these students.”

“This is a humanitarian crisis. But the good news is that with an influx of donor support we can scale up programs right now,” Kim added. He said tensions in Lebanon were very high, with many Lebanese feel they have been pushed into poverty because of the refugees.

Kim pointed out that despite the strain Lebanon has the infrastructural and professional capacity to help incoming refugees. He asserted that the only thing required is greater monetary donations.

Kim’s visit is the first by a World Bank president to Lebanon in 14 years.