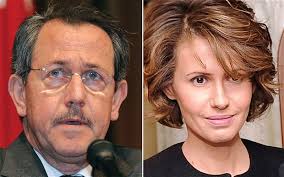 Syrian first lady Asthm and her father Fawaz Akhras
Share:
It is a modest terraced house on a suburban street, with a pebble dash facade and pink roses on its tiny front lawn. But to Syrians opposed to the regime of Bashar al-Assad, who is staging a controversial presidential election in Syria today, the house is a lightning rod.

Its owner is Fawaz Akhras, the father of Mr. Assad’s British-born wife and a longtime resident of Britain. His loyalty to Assad’s regime has brought on attacks on his suburban house, its walls paint-bombed and windows smashed.

“See the satellite dishes there, so he can follow the news in Syria?” says Mohammed, a Syrian neighbor, gesturing at the house. “But we never see Akhras. I don’t want to see him.” He declined to give his full name; like other Syrians critical of the regime, he worries about repercussions for his relatives at home.

However, opinions about Mr. Akhras, a cardiologist who works at a private hospital, are far from uniform among Syrians in Acton, a neighborhood in West London with a large Middle Eastern population.

“There are many Syrians here who back the regime”, says Malik al-Abdeh, a Syrian journalist who lives across the road from Akhras and knew Syria’s first lady, Asma, when she was growing up. She appeared today on Syrian TV casting a ballot alongside her husband.

At the outset of Syria’s conflict, when peaceful protesters called for political reform, there was speculation that she might be a moderating influence on Assad, who succeeded his father in 2000. Similar claims were made for Akhras, the father-in-law, who has lived in Britain for four decades. But leaked emails later showed that both were supportive of the regime despite its brutal tactics in putting down its opponents.

British Syrians’ political and ideological allegiances track those of people back home, says Abdeh, a director at the Movement for Justice and Development, a pro-democracy group. Most Sunnis back the opposition; many non-Sunnis support the regime. But more have swung behind Assad because they fear the Islamist extremists in the opposition, and sense that the regime is winning.

He himself refuses to criticize Akhras. “He’s a doctor. He has been here for many years. He isn’t ostentatious – in the league table of wickedness he isn’t very high up,” he says.

He adds, however, that when it was revealed in 2012 that Akhras had been in friendly contact with the Syrian regime, many local Syrians became “very angry.”

Born in Homs, Akhras moved to Britain in 1973 – a time when a large number of Syrians were leaving to escape the dictatorship of Hafez al-Assad. These exiled Syrians hoped that under his son Bashar, a British-trained eye doctor, the situation would improve.

Akhras met his wife, Sahar Otri, then an official at the Syrian embassy, and trained in Britain as a doctor. His daughter, Asma, was born in 1975 and educated in London, where she was known as Emma. After university, she worked in banking before marrying Bashar in 2000.

Early on in the conflict, as the crackdown worsened, observers wondered what Akhras, who is said to be mild-mannered and likeable, made of his son-in-law’s brutality, including the Syrian military’s shelling and bombing of Homs, his home city.

In 2012, the Guardian newspaper obtained several thousand emails between Akhras and the regime, which suggested that as the crackdown worsened and Western criticism mounted, he had offered advice and moral support to the embattled Syrian president.

“Until that moment it was unclear where Fawaz and Asma stood,” says Chris Doyle, director of the Council for Arab-British Understanding, a charity. “I was routinely asked, ‘has Asma left Syria?'”

The Guardian reported that Akhras counseled Assad via email on how to shape Syria’s response to media reports of brutality by its security forces, including a Channel 4 film that appeared to show torture of children. The emails dated between June 2011 and February 2012.

“The emails confirmed once and for all that they had both nailed their colors to the mast and believed in the crackdown. They showed that they were comfortable with what was going on,” says Mr. Doyle.

He speculates that Akhras’s interests – in terms of his daughter and family – are now firmly tied to the regime since if it falls he would be unable to return to Syria.

The sense that one’s future and family in Syria is tied to one’s political allegiance is shared by all British Syrians. Unsurprisingly, many declined to talk politics ahead of today’s election.

Akhras is keeping a low profile in his adopted hometown. He did not return calls requesting an interview, although the receptionist at his clinic said he was in London and working. Neighbors say he is only seen on the street as he hops into his car on his way to work.

An organization he helped set up, the British Syrian Society, has largely wound down, say observers. Its website has carried no news since 2010, except a simple message.

“The British Syrian Society is saddened and appalled at the violence and loss of life in Syria,” it reads. “Our thoughts and wishes go out to all our friends in Syria and we dearly hope for an end to the troubles that have overcome Syria since March 2011.”