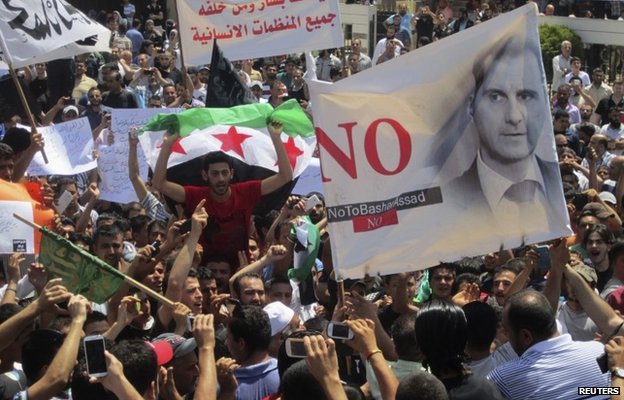 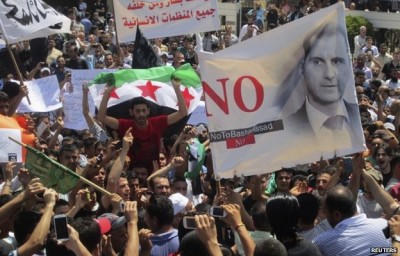 By Jim Muir
Despite ritual denunciations of Syria’s presidential election as a farce by the exiled opposition coalition and its Western backers, many of the millions of refugees and even activists see it as depressing confirmation that the regime is there to stay, unwilling to compromise, and that hopes of an early end to their plight are dim.

“We can’t go back if Bashar is still there,” says one refugee from the Aleppo countryside, queuing to sign on at the registration centre in Beirut.

“The election is an obstacle to our return,” adds another from the city of Aleppo.

“It will have a negative impact on the Syrian people. The situation will stay the same, and it will be prolonged. If there’s no change, nothing new, we’ll just be stuck as we are.”

‘Going nowhere’
Jihad Yazigi, editor of the economic newsletter The Syria Report, says “depressed” is the best single word to describe the morale of Syrians outside the country.

“There has been immense suffering, and they are just realising that because they are not going back, that means their lives are definitely changing for the medium- to the long-term.”

Mr Yazigi says many Syrian businessmen have begun investing in the main refugee host countries, especially Lebanon and Jordan, and buying rather than renting property because they know they are not going home any time soon.

“But for the large majority of refugees who can’t afford to open a business or whatever, this is extremely depressing, because at the same time of course you have a decline in humanitarian support, so people just have the sense that they’re going nowhere,” he adds.

The dismay spreads to the once-buoyant activists who have been working from Lebanon.

“We are actually losing hope of living a normal life,” says one, who asks not to be named.

“I don’t feel that I have a future, because most of us have tried living in different countries, but it’s very hard. So maybe staying inside Syria is the best, even if Bashar is the president.

“In a way, I can forgive those who surrender and go and vote for Bashar. We never thought during the past two years that he would still be there for another election. We give up. Maybe this revolution gave us nothing, except that the Iranians and Shia will have more control over my country.”

‘Continuing war’
Nobody seems to be pinning much hope on President Barack Obama’s promises of more US support for the “moderate” opposition.

“I think the only way of turning this around and getting a political solution is exerting enormous military pressure on the regime, either through a Western attack or a massive influx of weapons to the opposition,” says Mr Yazigi.

“But I don’t see this coming, so I don’t think in the mid-term we can expect anything new. I think we will just see the war continuing as it is.”

Activists concede that the external opposition leadership is ineffective; that the plethora of rebel groups on the ground are divided and their mission complicated by the mushrooming of radical Islamist factions; and that Western and regional backers are half-hearted and pursuing their own agendas.

They realise that turning all that around will be a monumental task, one that will take time and much more unity of effort all round than is currently prevailing.

‘Change will happen’
In the meantime, some believe that the threat to Bashar al-Assad’s rule may come not from the opposition but from within his own loyalist camp, or even from his outside backers such as Russia and Iran, who they believe may decide to dump him if he no longer serves their interests.

“Even his own allies like Russia and others are just looking after their own interests,” says activist Khalid Ikhtiar.

“When the regime army was in Beirut and Lebanon [between 1976 and 2005], Lebanon was a province of Syria. Now we in Syria are a province of Iran. says activist Khalid Ikhtiar.

“When the regime army was in Beirut and Lebanon [between 1976 and 2005], Lebanon was a province of Syria. Now we in Syria are a province of Iran.

“They are running their own show. For them it’s just like a chess game, and Bashar al-Assad is just a pawn on the board. When they feel it’s really trouble, they won’t mind getting rid of him.”

So the struggle on the ground is set to continue, despite the elections. But all believe that in the long run, change is bound to happen, that Syria can never be the same.

“It’s a process. I think we’re learning from our mistakes, but it’s a lifetime struggle,” he says.

“Our generation right now inherited this regime from our fathers and grandfathers. Now we’re afraid to make our children inherit this civil war. I’m happy enough to be a bridge, because our heads are so messed up right now.”