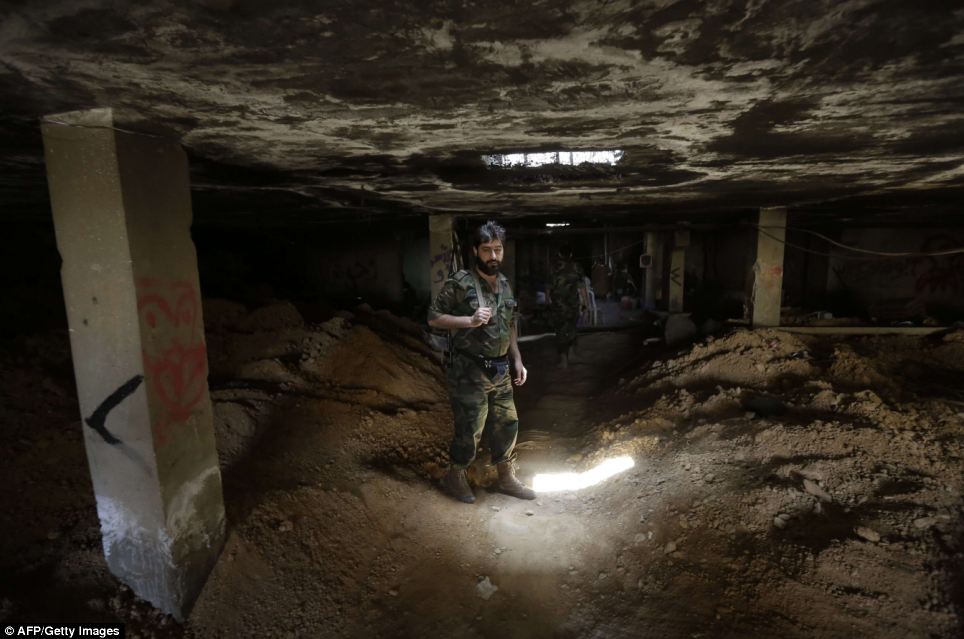 Election observers from North Korea, Iran and Russia have arrived in Syria to monitor the poll, which has been branded as a farce by opponents Read more: http://www.dailymail.co.uk/news/article-2646477/A-nation-divided-As-Syria-goes-polls-expected-Assad-landslide-victory-bombs-no-sign-ceasing.html#ixzz33ZRGaa8f Follow us: @MailOnline on Twitter | DailyMail on Facebook
Share:

With Syrian President Bashar al-Assad poised to win a third term in office in an election denounced as a sham by the West, his chief ally, Iran, is trumpeting his anticipated victory as its own.

Recent days have seen a flurry of declarations by top Iranian officials celebrating not only the affirmation of Assad’s continued hold on power that the vote represents but also the defeat it appears to signal for three years of U.S. policy in Syria, which has as its stated goal Assad’s fall.

The United States has repeatedly dismissed the election taking place Tuesday as a “parody” because the outcome is guaranteed by rules written by the Assad regime. There are no serious contenders challenging Assad’s bid to be reelected for a third seven-year term in office, there will be no independent observers, and many parts of the country are either controlled by rebels or engulfed in fighting.

Iran, however, dispatched a team of monitors Monday to observe the voting, part of an extensive effort to mirror failed U.S. policies in Syria with initiatives asserting ownership of the crisis.

“Foreign powers should give up their illusions about fulfilling their personal desires and strategies through military methods in Syria,” Iran’s foreign minister, Mohammad Javad Zarif, told a Friends of Syria conference in Tehran over the weekend. The choice of name seemed intended as a deliberate jab at the U.S.-backed Friends of Syria alliance created to support the Syrian opposition.

“They should admit that there is no way to solve the crisis of Syria other than the willpower of the Syrian people, which will be shown at the ballot box,” Zarif told the gathering, reportedly attended by representatives of 30 countries friendly to Iran.

“The strategy of the U.S., Saudi Arabia, Turkey, Qatar and European countries to overthrow Bashar al-Assad has failed,” Maj. Gen. Yahya Rahim Safavi said in comments quoted last month by the government-run Press TV. “This is a strategic failure for the Western, Arab and Zionist front and a big victory for the Islamic Republic of Iran.”

The election seems to offer a vindication of Iran’s steadfast support for the Syrian regime, which has served as the linchpin for Tehran’s projection of power into the Arab world since the birth of the Islamic republic in 1979.

Iran vowed early in the conflict that it would not permit Assad to fall, and it has so far delivered on its word, pumping billions of dollars into the Syrian economy and providing weapons and training to loyalist forces. Shiite militias from Iraq, funded and trained by Iran, have provided much-needed manpower to supplement weary government forces. Iran also backs the Lebanese Shiite Hezbollah movement, which played a crucial role in turning back Syrian rebel advances over the past year.

Although Iran has frequently denied sending military personnel to fight in Syria, Iranian media widely reported the funeral Sunday of a senior commander in Iran’s Revolutionary Guards Corps. Gen. Abdollah Eskandari had been captured and beheaded by rebels on one of the most contested front lines in the province of Hama, suggesting that Iran also is more extensively involved in the fighting on the ground than it is prepared to admit.

That Assad is holding an election three years after the uprising against him began is testimony as much to the lukewarm support the West has given to the Syrian opposition as it is to the endurance of his allies, including Russia as well as Iran, analysts say.

President Obama last week announced an unspecified increase in assistance for the rebels but also acknowledged in an interview with NPR that the program is still in its infancy and could take time to implement.

“In Syria, America is building castles in the air,” said Maj. Gen. Hasan Firuzabadi, the chief of staff of the Iranian armed forces, according to comments reported by the semiofficial Fars News Agency. “The Syrian opposition has been defeated.”

Western diplomats say they hope that Iran’s entanglement in Syria will prove unsustainable over time and that Tehran will find its resources stretched by the burden of having to continue to back Assad in what is likely to be a long fight against a persistent insurgency.

In the meantime, however, Iran is likely to press ahead with its own version of a peace plan, which counters the proposals backed by the United States at failed talks in Geneva this year, said Ibrahim Hamidi, a senior correspondent with the London-based al-Hayat newspaper, who is Syrian. The plan envisages Assad’s reelection being followed by limited measures to include approved opposition members and localized cease-fires.

Meanwhile, Iran is translating Assad’s military gains against the rebels into diplomatic overtures to the Sunni Arab countries that back the opposition. The emir of Kuwait met with Khamenei on Monday, the second day of a groundbreaking visit aimed at easing tensions. Kuwait has close ties with Saudi Arabia, Iran’s archenemy, which has also expressed a tentative willingness to engage in talks with Iran.

Iran’s interior minister boasted last week that the rush by foreign countries to talk to Tehran contrasts with the diminished influence in the region of Iran’s “enemies.”

“They are desperately entangled in their self-made crises and have been forced to withdraw from Afghanistan, Iraq and Syria,” he said, without directly naming the enemies.

Meanwhile, Syrians were braced for a feared surge in violence after several rebel groups threatened to attack during Tuesday’s voting. In Aleppo, Syria’s biggest city, more than 50 people were killed in the past two days in rebel shelling of regime-held areas, according to the Britain-based Syrian Observatory for Human Rights. At least 10 died in government airstrikes against the rebel-held portion of the city.