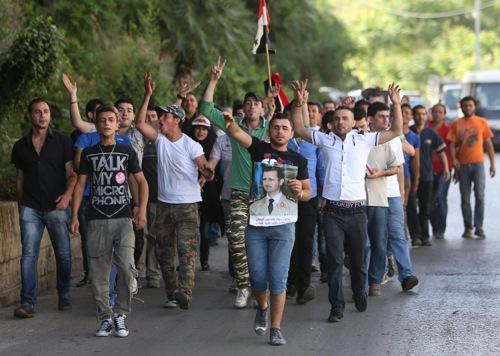 Syrian citizens who live in Lebanon shout slogans and carry a portrait of Syrian President Bashar Assad, as they walk towards to the Syrian embassy to ballot their vote for their presidential elections, in Baabda, east of Beirut, Lebanon, Wednesday May 28, 2014. Thousands are flocking to the Syrian embassy in Lebanon as expat voting starts ahead of Syria’s June 3 presidential election.
Share:

Thousands of Syrians clogged approach roads and formed lines outside their embassy here on Wednesday as voting for expatriates began in an election that is expected to return President Bashar al-Assad to power.

Mr. Assad has faced down an insurgency that began with political protests in March 2011 and exploded into civil war as the government cracked down and opponents took up arms. The election inside Syria is to be held next Tuesday, with two lesser-known candidates formally opposing Mr. Assad.

Scores of Syrians at the embassy on Wednesday told a reporter that they planned to vote for Mr. Assad. None of those interviewed said that they would vote for his nominal opponents. Of those interviewed, only a few said they had come as war refugees; many had long worked in Lebanon or were studying here.

Refugees face hurdles if they want to vote in the Syrian election, including a requirement that they entered Lebanon through an official border post. That ruled out hundreds of thousands who crossed the porous border anywhere they could or avoided official crossings because they feared the authorities.

Refugees face hurdles if they want to vote in the Syrian election, including a requirement that they entered Lebanon through an official border post. That ruled out hundreds of thousands who crossed the porous border anywhere they could or avoided official crossings because they feared the authorities.

The Syrian Embassy lies on a narrow street in the suburb of Baabda shaded by eucalyptus trees, near a monument to Lebanon’s own 15-year civil war, which started in 1975 and tore much of Beirut and other cities apart.

Lebanese security forces blocked off a street, setting up metal detectors and channeling voters through lanes of plastic tape. The Lebanese authorities sent in reinforcements as the crowds swelled to unexpectedly large numbers. People who went there to vote said some people were injured in the pushing and shoving and some were beaten by troops.

Inside the embassy, officials checked the identities of some of the 100,000 Syrians registered to vote and handed out ballot papers with photographs of the three candidates.

United Nations officials in Geneva have said that the civil war has driven nearly three million refugees out of Syria, with the numbers increasing by 100,000 each month. The number of Syrian refugees in Lebanon is estimated at around a million.

Mr. Assad is seeking a third seven-year term after taking over from his father, Hafez, in 2000. Neither of his little-known opponents, Hassan el-Nuri and Maher al-Najjar, is considered to have any chance of winning. The United States and the Syrian opposition have dismissed the election as a sham which, analysts said, is apparently intended to impart a sense of legitimacy to a government that tolerated no real dissent before the uprising and has cracked down unrelentingly on its opponents since the first stirrings of revolt in March 2011.

One voter, who declined to be identified by name for fear of reprisals, said he had been forced to vote but corrected himself to say it was his “national duty.”

Others, though, seemed jubilant, wearing T-shirts bearing the president’s image and waving Syrian flags. “My blood type is Bashar,” said Ahmed al-Ali, a restaurant worker from the beleaguered northern Syrian city of Aleppo, who marked the ballot in his own blood and then dabbed his face with it. There was no sign of opposition supporters, many of whom have indicated that they would stay home rather than attempt to vote.

Inside the polling area on Wednesday, there were no closed voting booths and some voters asked poll workers — both pro-government volunteers and personnel from the embassy — to help them fill out the ballot paper.

Abu Mohammad, 25, who described himself as a businessman, said: “I’m a reasonable guy, an intellectual. Bashar is a doctor, he’s smart, he’s peaceful.”

Souad Abu Hilal, 25, a beautician, told a reporter: “I eat bread Bashar brings to Syria. Every country has mistakes, Bashar is going to fix all our mistakes.”

She wore a homemade T-shirt proclaiming: “Shabiha forever,” a reference to the pro-government gangs operating in Syria against perceived opponents of Mr. Assad.

“The good days are gone,” said Abu Hatem, 34, a plumber, adding that he had “of course” voted for Mr. Assad. “Only he can bring Syria back to its proud days,” he said.

Elsewhere in the region, the expatriate election seemed less enthusiastic.

In Amman, Jordan, The Associated Press reported, dozens gathered outside the Syrian Embassy to protest the voting. One placard read: “Anyone who votes has no morals.” But Lima Darazini, a pro-government voter from Aleppo, said she voted for Mr. Assad “because we used to live in safety during his rule, and because we love him,” The A.P. said.

Ya Libnan note: The number of registered Syrian voters eligible to vote in Lebanon is 100,000 according to the embassy. There are over 1.1 million registered Syrian refugees with UNHCR and over 500,000 Syrian workers in Lebanon . Even if Mr.Assad wins all the votes of the 100,000 registered Syrians this represents less than 7 % of total in Lebanon. It is important to note most of the Syrian labor force in Lebanon are young men over 18 years old.