Concord in the Mideast 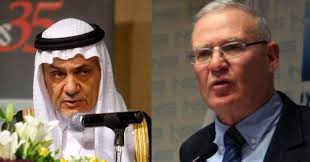 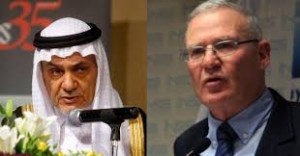 BRUSSELS: Getting the former spy chiefs of Israel and Saudi Arabia to talk together about peace is hardly a breakthrough, but it at least helps keep alive the idea of an eventual Israeli-Palestinian settlement.

Sharing a public stage here Monday were Prince Turki al-Faisal, the former Saudi intelligence chief, and retired Maj. Gen. Amos Yadlin, the former head of Israeli military intelligence. The gathering was sponsored by the German Marshall Fund, of which I’m a trustee. It was streamed live on the Internet around the world, including to Muslim countries where the very idea of such an open discussion is heresy.

There aren’t records kept of such things, but this appeared to be among the highest-level public conversations ever between senior members of the Israeli and Saudi establishments. It came about because Turki asked at a conference in Munich four months ago for an Israeli response to Saudi King Abdullah’s Arab Peace Initiative. Yadlin said he wanted to deliver a public answer, and when I asked Turki to join the dialogue, he agreed.

I wish real peace negotiations were as easy as these back-channel discussions. And even in this 90-minute conversation there were significant disagreements. But the two agreed that Abdullah’s peace initiative should be seen as a framework for discussions, rather than a diktat to the Israelis, and that issues such as borders, the status of refugees and Jerusalem must be negotiated between the parties.

A similar framework approach was attempted by Secretary of State John Kerry until it imploded last month after the Israeli announcement of new apartments for settlers and the Palestinians’ refusal to bargain. You could argue that returning to the peace train is a waste of time, given such intransigence on both sides.

And yet the dialogue continues, as in the conversation Monday, and the reason is obvious: Even Israeli Prime Minister Benjamin Netanyahu and Palestinian Authority President Mahmoud Abbas recognize that they have terrible options if hope for peace really disappears. Meanwhile, the international community continues to push the parties to settle this conflict. The latest evidence is Pope Francis’s statement during his visit to the West Bank last weekend that the stalemate is “increasingly unacceptable” — and the agreement of Abbas and Israeli President Shimon Peres to meet him next month in Rome.

Pope Francis could even propose the Saudi peace initiative as one framework for his talks. As expressed here by Turki, it would include a promise of Arab recognition of Israel and an end of the conflict, if workable compromises can be found on the hard issues of borders, refugees and Jerusalem.

Yadlin feels so strongly that Israel needs a settlement that he proposed a “Plan B” if other negotiating options fail. He wants Israel to open the way for a Palestinian state by withdrawing unilaterally to defensible borders. He would offer financial and other incentives to coax resettlement inside Israel by what he estimates to be 60,000 to 100,000 Israeli West Bank settlers who would be on the other side of the new declared boundary. Such unilateral moves have a history of backfiring (think Gaza), but many thousands of Israelis agree with Yadlin that some version of Plan B makes more sense than continued occupation.

What the Brussels meeting showed me, finally, is that Israel and Saudi Arabia agree on most other major security issues in the region, if they could just broker a Palestinian settlement. On Syria, for example, Turki outlined a plan for aiding the moderate opposition and Yadlin said he “agreed with every word” of Turki’s answer, and then went even further by proposing steps to dismantle Syrian air power.

On Iran, too, the two countries have a similar view of the need for negotiations to halt any Iranian bomb-making capacity. Turki again went further, proposing that Israel should forswear the bomb in a nuclear-weapons-free Middle East that would be guaranteed by the permanent members of the U.N. Security Council. Given that the U.N. couldn’t agree on even the mildest sanctions against Syria after it used chemical weapons, Yadlin explained why Israelis wouldn’t trust such a plan. But it was good to hear the two discuss the usually un-discussable.

The Brussels conversation was just so much talk, a cynic might say. And it will undoubtedly take more pain to convince Abbas and Netanyahu that the benefits of a peace agreement are worth the political price. But listening to this discussion was a reminder that the status quo really isn’t tenable. Several weeks after Kerry’s negotiations broke down, sensible people are already talking about how to get them started again.