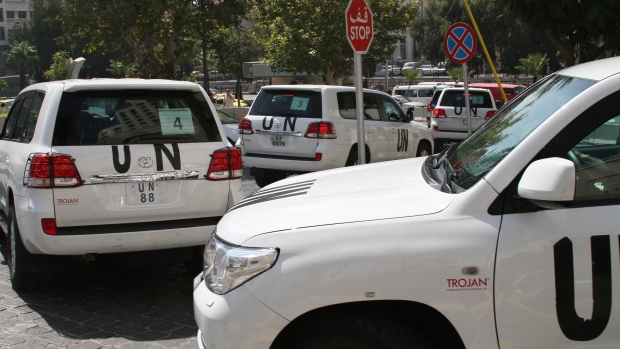 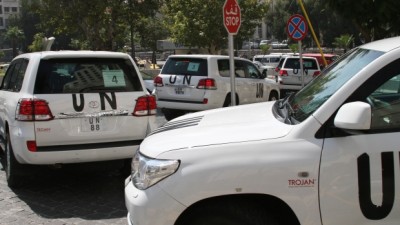 A team of international experts investigating the alleged use of chlorine bombs in Syria came under attack on Tuesday but all members of the team were safe and returning to base, the Organisation for the Prohibition of Chemical Weapons said.

Syria accused rebel fighters of abducting the members of the joint OPCW/U.N. fact-finding team, who had traveled to the central province of Hama to investigate allegations of illegal chlorine attacks by government forces.

The OPCW said “a convoy of OPCW inspectors and United Nations staff that was traveling to a site of an alleged chlorine gas attack” when it came it came under attack.

“All team members are safe and well and are traveling back to the operating base,” it said in a statement, without providing further details.

President Bashar al-Assad, whose forces have been battling rebels trying to unseat him for more than three years, agreed last year to hand over Syria’s entire chemical weapons stockpile after hundreds of people were killed in a sarin gas attack near Damascus.

Damascus denies allegations of military use of chlorine, which the opposition says has been dropped from helicopters in “barrel bombs” in recent months.

The Syrian Foreign Ministry said in a statement the fact-finding team had been trying to reach the village of Kfar Zeita where a ceasefire had been agreed between 8 am and 6 pm to allow it to carry out its work.

One car was hit by a bomb, forcing the convoy to turn back, it said, but only one of the vehicles returned successfully, the ministry said.

The opposition Hama Media Centre said the attack on the convoy was carried out by Assad’s forces. It did not mention the reported abduction.

The OPCW said last week that Syrian authorities had agreed to provide security for inspections of sites within government controlled areas and had stressed that it would be a “particularly challenging undertaking” gaining access to territory outside its control.

OPCW inspectors investigating earlier allegations of chemical weapon use in Syria were fired at by snipers, and shells and rockets landed near their hotels.

Syria is months behind schedule and still has roughly 8 percent of 1,300 metric tonnes of chemical weapons it declared to the OPCW. It looks increasingly likely it will miss a final deadline of June 30 to destroy the entire toxic stockpile, Britain said on Thursday.

The Chemical Weapons Convention, which Syria joined in October as part of a U.S.-Russian agreement to give up its chemical weapons program, does not ban chlorine, but does ban its use as a weapon.

France says it believes there have been 14 such attacks with the chemical in recent months.