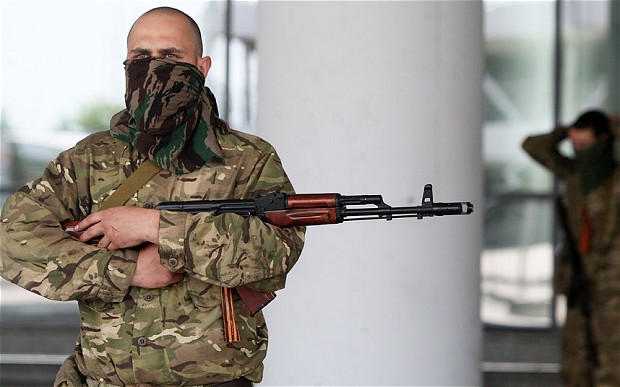 Pro-Russian militants take their position at the international airport of the eastern Ukrainian city of Donetsk
Share:

Ukrainian government warplanes carried out airstrikes against pro-Russian rebels who seized Donetsk international airport on Monday as both sides mounted an aggressive show of force following the election of a new president.

Reuters journalists saw black smoke billowing from the area of the airport after about two hours of repeated explosions and gunfire, while jets roared overhead. A security official also said that paratroops had landed in one of the fiercest clashes since violence broke out in the east two months ago.

Saying that a deadline had passed at 1 p.m. (1000 GMT) for separatist militants to lay down their arms, a spokesman for the Ukrainian joint forces security operation in the region said two Sukhoi Su-25 jets had carried out strafing runs, firing warning shots around Sergei Prokofiev International Airport.

“In reply, the guerrillas opened fire at random from all types of weapon,” he said, before a MiG-29 jet also took part.

A second spokesman, Vladislav Seleznyov, said: “A MiG-29 carried out an airstrike on the area where the terrorists were concentrated.”

The first spokesman said the militants had then spread out across the territory of the airport, whose state-of-the-art main terminal was built only for the 2012 European soccer championships held in Ukraine. “Right now at the airport, paratroops have landed and are cleaning up the area.”

He appeared to mean that troops had landed by helicopter.

The action, after an overnight move by rebels of the Donetsk People’s Republic to take over the airport, looked like a forceful first act by Petro Poroshenko, the billionaire who swept to the presidency on Sunday. He said he would not treat with “terrorists”, despite calls from Russia for Kiev not to step up its halting military operations in the east of Ukraine.

A local news website published a photograph of three men in camouflage with a rapid-fire grenade launcher pointing skywards on what appeared to be the modern glass and concrete roof of the airport terminal. It said they were separatist rebels.

In the morning, Reuters journalists saw three trucks carrying armed militants heading towards the airport and also spotted at least four armed men positioned on the roof. Representatives of the Donetsk People’s Republic said they had taken over the airport and were attempting to clear it of government forces stationed there.

Donetsk, a city of a million that is effectively the capital of the industrial Donbass region, is largely in the hands of pro-Russian separatists who prevented local people taking part in the presidential election on Sunday.

Donetsk airport authorities announced its closure to flights early on Monday after the separatists came to the facility to demand the withdrawal from the area of Ukrainian forces, who have been policing the perimeter.

“The rebels are in the terminal. The rest of the airport area is controlled by the (Ukrainian) National Guard. The two sides are in talks now,” airport spokesman Dmitry Kosinov told Reuters before the gunfire broke out.

The pro-Moscow rebels have declared autonomous “people’s republics” in the regions of Donetsk and Luhansk following makeshift referendums on May 11. They say the two regions are no longer part of Ukraine.

Only about 20 percent of the two regions’ polling stations functioned in Sunday’s presidential election and many voters stayed at home, fearful for their safety. No polling stations were open in the city of Donetsk.

A spokeswoman for the separatists said the group now at the airport was the “East” battalion which took part in clashes last Friday with a Ukrainian militia just west of Donetsk in which at least two people were killed.