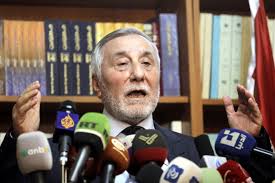 Jordan on Monday expelled the Syrian ambassador and ordered him to leave Amman within 24 hours, accusing him of making “offensive” statements about the kingdom.

The development was unexpected, since Jordan had kept a Syrian ambassador ever since the conflict erupted in 2011 in the neighboring country — despite quietly supporting rebels trying to overthrow the rule of President Bashar Assad.

The expulsion was first reported by the state-run Petra news agency.

Ambassador Bahjat Suleiman was declared persona non-grata because of “continued offensive statements, through his personal contacts or writing in the media and the social media against the kingdom,” according to a statement by the Jordanian Foreign Ministry spokeswoman, Sabah al-Rafie.

Jordan’s Information Minister Mohammed al-Momani also confirmed the expulsion in a text message to The Associated Press but provided no details.

Syria’s conflict, now in its fourth year, has killed at least 160,000 people, according to activists. Nearly 3 million Syrians have also fled the country, with around 600,000 seeking refuge in neighboring Jordan. However, Jordanian officials say the number is much higher.

Inside Syria, al-Qaida’s main affiliate claimed responsibility on Monday for two deadly car bombings the previous day in a pro-government neighborhood of the central city of Homs.

The claim for the attacks in the Zahra district — predominantly inhabited by Alawites and Christians who have mostly supported Assad in the civil war — was posted on the Nusra Front’s Twitter feed and militant websites.

The bombings, which killed at least 10 people, undermined the semblance of calm that had returned to the shattered city since a ceasefire deal in May between rebels and pro-government forces.

“God has given a gift to his warrior servants of the Nusra Front in Homs,” said the statement. “The two (cars) were detonated at the same time to kill the greatest number of thugs,” it said, referring to pro-government gunmen.

The bombings suggest that even as rebels steadily lose ground across Syria to pro-government forces, groups like the Nusra Front can still turn to large-scale bombings and attacks to pressure Assad.

The Zahra attacks could also threaten an agreement that is being negotiated between the government side and the rebels in the al-Waar neighborhood, across the Orontes River from Homs.