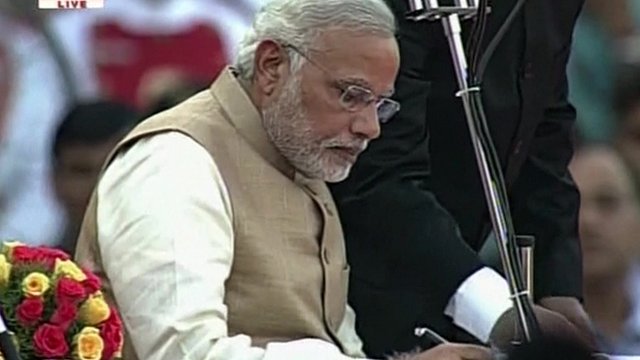 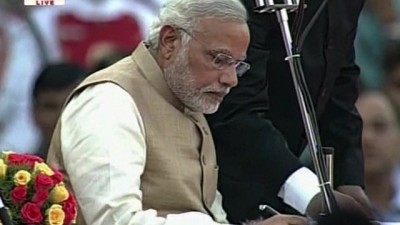 Narendra Modi was sworn in as India’s prime minister in an elaborate ceremony at New Delhi’s resplendent presidential palace on Monday, after a sweeping election victory that ended two terms of rule by the Nehru-Gandhi dynasty.

Millions of Indians watched the inauguration live on television as the 63-year-old Hindu nationalist leader, once thought of as too divisive to lead the world’s largest democracy, took his oath along with his cabinet members in the palace’s forecourt.

The low-caste son of a tea stall-owner, Modi has given India its first parliamentary majority after 25 years of coalition governments, which means he has ample room to advance reforms that started over two decades ago but have stalled in recent years.

Many supporters see him as India’s answer to the neo-liberal former U.S. President Ronald Reagan or British leader Margaret Thatcher. One foreign editor has ventured Modi could be so transformative he turns out to be “India’s Deng Xiaoping”, the leader who set China on its path of spectacular economic growth.

Modi invited leaders from across South Asia to his swearing-in ceremony, including Prime Minister Nawaz Sharif from arch-rival Pakistan, an unprecedented gesture that was as much a show of his determination to be a key player on the global stage as a celebration of his stunning election victory.

Even before his inauguration, Modi made waves on the global stage, where once he was treated by many with suspicion – and by some as a pariah – for Hindu-Muslim violence that erupted 12 years ago in Gujarat, the western state he ruled.

He has spoken with the presidents of the United States and Russia, and he has become one of only three people that Japanese Prime Minister Shinzo Abe follows on Twitter. The U.S. administration denied Modi a visa in 2005, but President Barack Obama has now invited him to the White House.

In a message released to fellow Indians and citizens of the world, Modi said the election had delivered a mandate for “development, good governance and stability”.

“Together we will script a glorious future for India. Let us together dream of a strong, developed and inclusive India that actively engages with the global community to strengthen the cause of world peace and development,” he said.

The pomp and ceremony unfolded as the summer evening closed in at Rashtrapati Bhavan, a colonial-era sandstone mansion with 340 rooms in the heart of New Delhi. Looking on were some 4,000 guests, ranging from members of the defeated Nehru-Gandhi family

Modi supporters exploded fireworks in celebration a few blocks away at the headquarters of his Bharatiya Janata Party (BJP) after the new prime minister was sworn in.

The BJP and its allies swept elections this month, ousting the Nehru-Gandhi’s Congress party in a seismic political shift that has given his party a mandate for sweeping economic reform.

Modi kicked things off on Sunday with an announcement that he would streamline the cabinet, a move to a more centralized system of governing aimed at breaking decision-making bottlenecks widely blamed for dragging down economic growth.

Arun Jaitley, 61, is the front runner to be named finance minister, party sources said. One of the top corporate lawyers in the country and a close Modi aide, Jaitley served in a previous BJP administration as commerce minister.

Pakistan’s Sharif said after arriving in Delhi that South Asia’s bitterest rivals now have an opportunity to turn a page in their history of troubled relations.

He said the nuclear-armed neighbors, which were traumatically separated at the end of British rule in 1947 and have fought three wars since, should together rid their region of the instability that has plagued them for decades.

“We should remove fears, mistrust and misgivings about each other,” he told the Indian news network NDTV.

The BJP has long advocated a tough stance on Pakistan, with which India has a major territorial dispute in Kashmir, and Modi has been seen as a hardliner on issues of national security.

In that respect, Modi’s decision to invite Sharif for his inauguration and bilateral talks on Tuesday came as a surprise and raised hopes for a thaw in relations between the rivals, which have been particularly frosty since 2008 attacks on the city of Mumbai by Pakistan-based militants.

Vikram Sood, former head of India’s external intelligence agency, the Research and Analysis Wing, told Reuters that inviting all the leaders of the South Asian Association for Regional Cooperation (SAARC) was “an astute” diplomatic gesture.

“This augurs well for the region, and an improvement of relations all over the region is possible if these moves are followed by other steps, bilaterally and multilaterally,” he said.

As a gesture of goodwill following their invitations, Pakistan and Sri Lanka released hundreds of Indian fishermen jailed for straying into their neighbors’ territorial waters.

India is the biggest South Asian nation, but friendships with neighbors have soured in recent years, allowing China to fill the gap.

China has built a port in Sri Lanka and is involved in upgrading another in Bangladesh, besides military and civil assistance to long-time ally Pakistan, heightening Delhi’s anxieties of being boxed in.

“Modi has appreciated the much-neglected fact that foreign policy begins at the nation’s borders,” wrote foreign policy analyst C. Raja Mohan in the Indian Express. “As a realist, however, Modi should be aware that major breakthroughs are unlikely amid the current flux within Pakistan.”