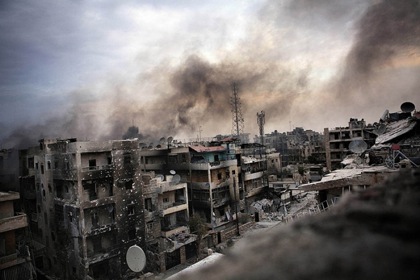 Syria destruction hell on earth “Years from now our grandkids will ask how we could’ve failed to bring justice to people living in hell on earth,” U.S. Ambassador to the United Nations Samantha Power tweeted
Share: 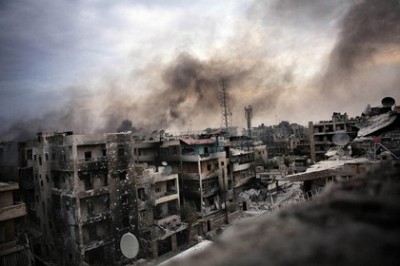 RUSSIA AND China on Thursday vetoed a U.N. Security Council resolution calling on the International Criminal Court to investigate war crimes in Syria. Western powers and human rights group condemned the veto, and rightly so.

But let’s get real. The threat of an investigation by jurists in The Hague would not deter Syrian dictator Bashar al-Assad from his war against Syrian civilians, which, by his reckoning, is going well. The only thing that could deter him is credible military opposition from the rebels, who continue to receive far too little help from the United States, which realistically is the only country in a position to change the calculus of this terrible war. Calling for ICC investigations and sputtering about the “disgrace” of Russia’s veto allow the United States and its allies to deflect attention from their own failure.

“Years from now our grandkids will ask how we could’ve failed to bring justice to people living in hell on earth,” U.S. Ambassador to the United Nations Samantha Power tweeted Thursday. “What will Russia/China say?” It’s a nice, indignant sound bite. But the more relevant question is as obvious today as it will be “years from now”: Why did we allow Syria to become a hell on earth in the first place?

For more than three years, President Obama has resisted advice from inside and outside his administration to abandon his passivity and do something to help Syria — not to send ground troops, the straw man his spokesmen regularly erect to fend off criticism, but rather to train andequip the rebels or to help patrol a safe zone for them to evade Mr. Assad’s depredations. Mr. Obama’s excuses have varied: Mr. Assad’s downfall was inevitable with or without U.S. involvement; the rebels weren’t deserving of U.S. help; anything the United States did would make things worse.

But without U.S. involvement, the worst-case predictions are coming true: More than 160,000 people have been killed, more than 9 million have been displaced from their homes, and terrorists allied with al-Qaeda are establishing safe zones from which they can attack Europe and the United States. Mr. Assad, stronger than ever, has given up much of his chemical weapons arsenal. But he continues to launch chemical attacks and to drop barrel bombs full of shrapnel on schools, bakeries and apartment buildings in rebel-controlled neighborhoods. With a few shoulder-fired missiles, the rebels could discourage those helicopter assaults. The United States won’t furnish the weaponry.

Such missiles would have to be provided with safeguards to keep them out of extremists’ hands. That would be doable but challenging. And why bother when it’s so much easier to blame Russia?