Walesa to tell Obama : Either you lead or get out of the way 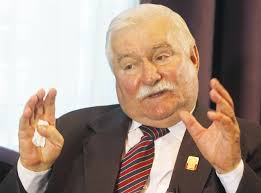 Speaking to The Associated Press, Walesa said “the world is disorganized and the superpower is not taking the lead. I am displeased.”

The former Solidarity leader said that when he meets Obama in Warsaw, he wants to tell him that the U.S. should inspire and encourage the world into positive action.

“The point is not in having the States fix problems for us or fight somewhere, no,” Walesa said. “The States should organize us, encourage us and offer programs, while we, the world, should do the rest. This kind of leadership is needed.”

“I will say: Either you want to be a superpower and guide us, or you should give the superpower to Poland and we will know what to do with it. Amen,” said Walesa, who is known for sometimes abrasive comments.

Obama is traveling to Poland next month to mark 25 years since the country emerged from communism.

The two failed to meet on Obama’s previous visit to Warsaw in 2011.

Walesa led Poland’s peaceful transition to democracy in the 1980s. The June 4, 1989 elections gave Solidarity a share in the power and paved the way for the ouster of communists.