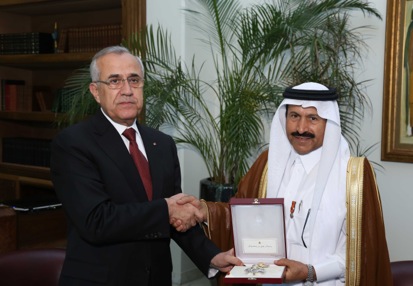 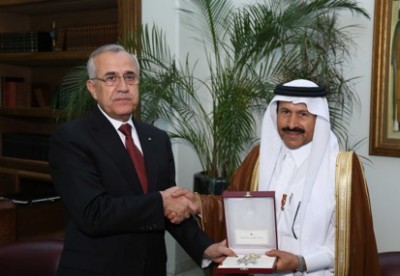 Asiri  received the award in  “appreciation for his endeavors.” NNA quoted Suleiman as saying

On his part Asiri voiced hopes  that Lebanon passes to the “shore of safety” by electing a new president, hailing President  Suleiman for all the wise decisions he took during his term.

“I hope that Lebanon passes to the shore of safety and stability by electing a new head of state,” said Asiri

From the presidential palace at Baabda Asiri  praised Suleiman , saying: “ President Suleiman was the wise ruler whose ultimate interest focused on how to strengthen the country’s national unity among the people, and on implementing the constitution.”

“We have a great hope in all the leaders and Lebanese figures who have national responsibilities, because Lebanon is worth sacrificing for to remain a symbol of civilization, culture and prosperity just like we know it,”  he added .

Asiri was reportedly very instrumental in securing for the Lebanese army a  $3 billion Saudi Arabian  grant , the largest ever received by the country .